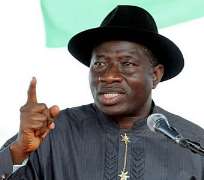 ABUJA, December 30, (THEWILL) - President Goodluck Ebele Jonathan has said government will fight Boko Haram, the “group of evil-minded people who want to cause anarchy to the end.”

He said both Muslims and Christians were victims of the explosives planted by Boko Haram, and called for a concerted effort by all well-meaning Nigerians to bring this problem under control.

President Jonathan agreed with President Issoufou that this was not a religious war, adding that “no religion asks its followers to throw bombs to kill people they don’t even know.”

The President called on neighbouring countries to cooperate with Nigeria in the effort to stop this evil, because “the perpetrators pass through borders at will and we have to ensure that there are no safe havens for them in the sub-region”.

He thanked the Nigerien President for the message of condolence and solidarity.

Earlier, Mr. Mohame Bazoum, Deputy Prime Minister of Niger Republic, said President Issoufou was concerned about the violence and loss of lives, and assured President Jonathan of the Nigerien President’s support in the efforts to check the activities of Boko Haram.

He urged Nigerians to emulate the tolerance exhibited by President Jonathan in handling the affairs of the nation.