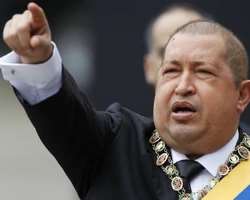 Venezuelan President Hugo Chavez speculated on Wednesday that the United States might have developed a way to give Latin American leaders cancer, after Argentina's Cristina Fernandez joined the list of presidents diagnosed with the disease.

It was a typically controversial statement by Venezuela's socialist leader, who underwent surgery in June to remove a tumor from his pelvis. But he stressed that he was not making any accusations, just thinking aloud.

"It would not be strange if they had developed the technology to induce cancer and nobody knew about it until now ... I don't know. I'm just reflecting," he said in a televised speech to troops at a military base.

"But this is very, very, very strange ... it's a bit difficult to explain this, to reason it, including using the law of probabilities."

Chavez, Fernandez, Paraguay's Fernando Lugo, Brazil's Dilma Rousseff and former Brazilian leader Luiz Inacio Lula da Silva have all been diagnosed recently with cancer. All of them are leftists.

Doctors say Fernandez has a very good chance of recovery and will not need chemotherapy or radiotherapy. Her diagnosis was made public on Tuesday.

"We'll have to take good care of Evo. Take care Evo!" he said.

The 57-year-old is Latin America's loudest critic of U.S. foreign policy along with Cuba's former leader Fidel Castro, and he frequently lashes out at what he calls the "Yankee Empire".

CASTRO'S WARNING
"Fidel always told me, 'Chavez take care. These people have developed technology. You are very careless. Take care what you eat, what they give you to eat ... a little needle and they inject you with I don't know what,'" he said.

In his comments on Wednesday, Chavez also slammed Washington and its European allies for criticizing Russia's recent parliamentary elections - and said they were planning the same thing for Venezuela's presidential election in October, when he will seek re-election.

"They are crying fraud and saying the elections need to be re-run ... They're trying to destabilize no less than Russia, a nuclear power. That's the madness of the Empire," Chavez said.

"I say this because here in Venezuela, the Imperial Yankee, the local bourgeoisie, and a good part of what they call the opposition parties here, are preparing a similar plan," he said.

"I call on the armed forces to be alert, on the Venezuelan people to be alert. Because we are not going to let the Imperial Yankee destabilize Venezuela again like they did in the past."

Details about Chavez's health remain a closely guarded secret, although he now appears to be recovering and is making longer and longer televised appearances.

Earlier this month he made his first official foreign trip after his surgery, to a regional summit in Uruguay.

Since his return he has often appeared sporting something of a younger, new look: a dark sports coat over an open-necked maroon shirt, and is hair is growing back after chemotherapy.

It is far cry from the green fatigues and red beret that he became famous for wearing for much of his 13 years in power.