I Did Not Travel To UK For Abortion- Iyabo Ojo 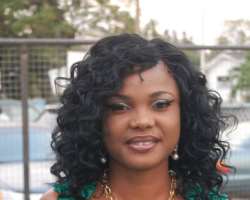 Nollywood actress, Iaybo Ojo has denied rumour spreading around that she travelled to the UK for abortion.

The beautiful mother of two in a recent chat with a soft sell weekly magazine The Encomium, debunked the news as untrue but that the people behind such story are only trying to destroy her image, "That is a big lie, I never traveled for abortion.It is a stupid rumor and those behind it are only trying to destroy my image, but God will never allow them to succeed.she said.

"I traveled for the progress of my career and by the grace of God I will surely succeed against all odds.

On Her Love For Tattoo? She said;"I am a lover of fashion, I love beauty and tattoo is something I have always loved.I am crazy about it and that's why I wear it".

She also stated that she is currently in another relationship but wouldn't want to disclosed the identity of the lucky man, she further added that she is not in a hurry for another marriage so as to avoid what once happened to her."because you are in a relationship does not mean you have to rush it. I rushed into one. That was why I got married very early and I got out of it because I didn't take my time to know him very well" she said.