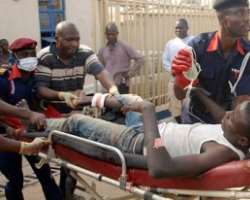 *Okonkwo, Uma Ukpai, others also; urge Christians to be ready

*It's impossible to police all Nigeria- Azazi
BY SAM EYOBOKA & DANIEL IDONOR
LAGOS - Christian leaders led by the National President of the Christian Association of Nigeria, CAN, Pastor Ayo Oritsejafor, yesterday reviewed Christmas day bomb attacks by Boko Haram sect that killed more than 40 worshippers as they trooped out of St. Theresa's Catholic Church in Madalla, near Abuja and declared that enough is enough, vowing that Christians would henceforth fight to defend themselves.

In a statement that chronicled several attacks and killings of Christians and destruction of their places of worship, the Christian leaders said: 'We have hitherto exercised restraint in our public statements on these matters. However, we cannot continue to do so indefinitely, and are determined that in the year 2012, if these unprovoked attacks continue, and Christians remain unprotected by the security agencies, then we will have no choice but to defend our lives and property and take our own steps to ensure our safety and security'.

Also yesterday, the Sultan of Sokoto and spiritual leader of all the Muslims in Nigeria, Alhaji Sa'ad Abubakar III, after over two hours  meeting with President Jonathan, decalred:  'There is no conflict between Christians and Muslims, between Islam and Christianity. It is a conflict between evil people and good people and the good people are more than the evil doers. The good people must come together to defeat the evil ones .'

The Christian leaders in their statement yesterday said, 'Nigerians awoke on Christmas morning to the news that Boko Haram had struck again, this time they had bombed St Theresa's Catholic church in Madalla, near Abuja with the loss of up to 40 lives, including children. As the day progressed reports that four other bombs targeting Christians had exploded in Jos and Yobe State, casualty figures were not yet available at the time of writing.

A survivor at Madalla on Christmas Day.
'We are deeply concerned that Boko Haram sect members and their apologists continue to wage war against Christians, in furtherance of their Islamisation agenda, especially Christians in the North Eastern states where Boko Haram members first unleashed their terror.

The terrorist group in their media ranting claim that they unleashed violence on innocent Nigerians in reprisal for the killing of their leader, Yussuf. It was in fact Yussuf that orchestrated and inspired the killing of no fewer that 800 persons, mostly Christians, when it unleashed its first major act of unprovoked sectarian violence in Maiduguri in July 2009.

'We note with dismay that public condemnation of the atrocities committed by Boko Haram have come mainly from members of the Christian community. We believe that when Muslim clerics, political leaders and leaders of thought from Northern Nigeria publicly condemn and denounce the activities of Boko Haram it will go a long way to quelling this threat to our future peaceful coexistence. '

Apart from the ransacking and wanton destruction of churches and personal belongings of numerous Christians, three Pastors including Rev. George Orji, who was beheaded by Yussuf, were brutally massacred. Pastor Orji's widow and children were relocated and settled by the Christian leadership in view of Boko Haram's continued hostility in Maiduguri.

A recent example of their persisting terror is to be found in the early morning attack of December 21 st, 2011 in Maiduguri, Bornu State. On that occasion, their members walked into the home of Pastor Peter Wakai, and murdered both himself and his son in cold blood.

'This was after his church had closed down because of the tension that prevails in the city. At the time of this release the road into Putiskom, Yobe State was blocked by Boko Haram to facilitate them wage their war on innocent citizens of the town. On November 27th about eight Churches were torched and four people reportedly killed by what were benignly and erroneously described as irate Islamic youths.

No mosque was razed; no Muslim was killed'.
Nigerian security forces, including the Police Force have also suffered at the hands of these terrorists as they have also been targeted and many have lost their lives to attacks by these terrorists; we strongly decry this and commiserate with their families'.

It is difficult to police all spots - Azazi
Also speaking with newsmen at the Villa, The National Security Adviser, NSA, Gen. Andrew Azazi who attended the meeting admitted that it was absolutely difficult to man every point of the country when there are security problems.

Azazi while assuring Nigerians that the security operatives were working to ensure they are on top of the situation, regretted that it was difficult to police all trouble spots in Nigeria.

Asked why it was difficult to check the recurring incidents along the Suleja-Zuba axis, he replied, 'It is absolutely difficult to man every point of the country when there are security problems. Like I have said before, there is need for security awareness. There is need for public participation so that there must be cooperation between security and the society for us to make progress'.

On possible reprisal by the Christians over the Christmas bombings, the NSA said, 'We can't have a situation where we think that one bad turn deserves another. We are Nigerians and like we always say, I don't see any major conflict between the Christian community and the Muslim community. You will find a situation where, certain individuals for whatever reasons are causing these problems. Have we thought of what their ultimate intentions are? Why will somebody go on to bomb Christians on a Christmas Day? Look at the ultimate intentions. Do they want to really raise temper elsewhere? I think the Christian leaders, CAN, are meeting tomorrow (today) to emphasise to the Christians that we must live together as a nation. Retaliation is not the answer because if you retaliate, at what point will it end? Nigeria must survive as a nation, that is the key thing'.

It's inhuman, barbaric -Oritsejafor
Denouncing the bomb attacks earlier, Pastor Oritsejafor said, 'this is a barbaric and most uncivilized action of human beings in a civilized world. Even animals have respect for each other. It is inhuman! It is inhumane! It is barbaric! It is satanic!'

He wondered why certain characters are sponsoring these acts of violence on fellow human beings 'and go home without any feeling of guilt. I am not talking of people who are used to carry out the dastardly acts but those who sponsor them. So these people go home, eat and probably have children who they play with in their homes.'

Let us not deceive ourselves, as good as religion is, it can be a terrible thing because it is only religion that can give a man the conviction to do this kind of thing. It is incredible. Christmas is a day when over 80 million Nigerians join billions of fellow Christians across the globe to celebrate the birth of Jesus Christ, wouldn't you just respect that?

'I don't think anybody who cannot respect such a sacred date will have any respect for human life. It is totally barbaric and unacceptable. I am short of words to describe how I feel.

According to him, Nigeria must brace up to face the truth that there is a grand design to Islamise the nation, and that is why Christian leaders would soon meet to address the issue frontally once and for all, directing doubting Thomases to ancient history to find out how Egypt, Libya and most of the North African nations became Islamic countries.