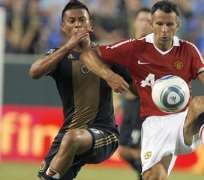 Manchester United manager Alex Ferguson has urged winger Ryan Giggs to extend his contract with the Premier League champions for another season.

Giggs, 38, is the most decorated player in United's history and last week he revealed plans to sit down with Ferguson before deciding whether to continue playing after this campaign.

"I think Ryan can play another year," Ferguson told reporters ahead of the visit of Wigan Athletic on Monday.

Giggs, who hold the club's appearance record having played in 891 games while scoring 161 goals since signing for United in 1990, remains a key player for Ferguson and showed his class once again during the 5-0 win at Fulham on Wednesday.

"There's no evidence at this moment in time that his energy, stamina or speed are decreasing. There's absolutely no evidence at all. In fact, it's exactly the same as it was the last two or three years. It's amazing," Ferguson said.

Welshman Giggs, who retired from international football in 2007, told United's website (www.manutd.com) last week he was "enjoying things more than ever" but needed to "see how I'm feeling" before making a final decision on whether to retire.

Ferguson, though, has made it clear he wants the 12-times Premier League winner to keep playing for the Old Trafford club.

"But, on the evidence of what we're seeing at the moment, I think he can play for another year."

PIVOTAL PLAYER
For the first time in Ferguson's 25-year tenure at the club, nearest rivals Manchester City are challenging for the title with United's bid to retain their crown hampered by injuries.

The midfield has been especially affected with Tom Cleverley and Anderson sidelined and Darren Fletcher on an extended break to battle a bowel condition leading Ferguson to challenge 30-year-old Michael Carrick to become the driving force.

"It's time Michael became the pivotal player of our team," he said. "Now is the time for him to establish himself in a long period of dominating the centre of midfield like he has in the last few weeks."

City spent Christmas heading the top flight for the first time since 1929 but United trail by only two points and Ferguson said Carrick has been vital to the team's resurgence since October's humiliating 6-1 home defeat by their local rivals.

"Michael has been one of our best players. He has been instrumental in what's happening to the team at the moment," Ferguson said.

"He's grabbed the nettle - there's no question about that. In some ways, he has maybe seen the departure of Paul Scholes as his opportunity to be the main man in midfield now," he added referring to Scholes's retirement at the end of last season.