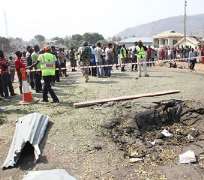 SAN FRANCISCO, December 26, (THEWILL) – European leaders, Cross River State Governor, Islamic groups as well as the civil society have roundly condemned the Christmas Day bombing of a Catholic Church in Madalla, near Abuja, Nigeria’s capital city and other blasts that targeted a church in Jos and the SSS headquarters in Damaturu, Yobe State.

More than 40 people were killed in all, including two suicide bombers of the terrorist group Boko Haram.

The British Foreign Secretary William Hague said, "These are cowardly attacks on families gathered in peace and prayer to celebrate a day which symbolizes harmony and goodwill towards others. I offer my condolences to the bereaved and injured."

The German Foreign Minister Guido Westerwelle described the bombings as an act of cowardice. "Even on Christmas Day, the world is not spared from cowardice and the fear of terrorism.

"Tolerance ... and the willingness to resolve conflicts through peaceful means are not just the message of the Christian holiday of Christmas and other religions of the world. They can also be the key to peace, freedom and prosperity of entire regions."

The French President Nicolas Sarkozy said, "France addresses its condolences to the authorities and people of Nigeria and expresses its solidarity in their fight against terrorism and for the consolidation of democracy and the rule of law throughout Nigeria."

Italian Foreign Minister Giulio Terzi noted the attacks struck at "the universal principles of civility. I express my strongest condemnation of these vile attacks.

The founder of the Islamic Supreme Council of Canada, Imam Syed Soharwardy said, "This is an extremely deplorable crime that has been committed by those people who follow the hate-mongering ideology of Wahabism. It's not Islam. This is an un-Islamic action.

“We remind the media and the people that the group who has claimed the responsibility, Boko Haram is a Wahabi group. We do not consider these people to be the true followers of Islam.

“Islamic Supreme Council of Canada expresses deep sadness on the loss of innocent lives. We stand shoulder to shoulder with the worldwide Christian community in solidarity against this violence.

Islamic Supreme Council of Canada demands that the criminals must be captured and punished to the full extent of the law.”

The umbrella Islamic body for Muslims in the North, the Jama'atu Nasril Islam (JNI) through its Secretary General, Dr. Khalid Abubakar Aliyu said, “It is rather unfortunate that Nigerians are losing their lives to bomb blasts. Security agencies must find the perpetrators and bring them to justice”

The Sultan of Sokoto, Alhaji Sa'ad Abubakar III said, "Violence is not part of the tenets of Islam and would never be allowed to tarnish the image of the religion."

The Muslim Rights Concern (MURIC) in a statement by Dr. Ishaq Akintola said, "The attackers cannot claim that they were revenging the attack on Muslims in Jos during the last Eid el-Fitr on August 30, 2011 which left many Muslims dead because Christians celebrating Christmas earlier on December 25, 2010 were the first to be killed in bomb explosions.

"Nothing in the scriptures of Islam justifies this kind of attack. We therefore assert clearly, unequivocally and unambiguously that Boko Haram is not fighting for Nigerian Muslims."

The Chairman of the Sokoto State chapter of Izalat Bida'a Waikamtul Sunnah (JIBWIS), Sheikh Abubakar Usman Mabera, said, "Whoever takes the life of a fellow human being has committed evil irrespective of his religion - whether Christian or Muslim - and will pay for his sins. So, this is an act of terrorism which is against Islamic teachings.”

The Cross River State Governor, Senator Liyel Imoke described the Christmas Day bombings as an extreme act of terrorism and a distraction to national unity and corporate existence of Nigeria.

A statement by Imoke’s Special Assistance Media and Chief Press Secretary, Mr. Omini Oden, said the senseless bombing was a grievous strike at the very heart of Christianity and an act of provocation directed at the Christian Community in the country.

He stressed that in the spirit of the festive season it is critical for the nation to break down the barriers of hatred and fear built and coexist as brothers in oneness.

The Governor appealed to security agencies to rise up to the challenge of asserting all the security trials facing the country.

He maintained that no matter the intensity and frequency of bombings in the country, the unity, corporate existence of Nigeria remains sacrosanct.

The Resource Centre for Human Rights & Civic Education (CHRICED) in a statement by Executive Director, Ibrahim M. Zikirullahi, strongly condemned in its entirety the gruesome assault on the Christians and their Churches saying, “We denounced every motive behind this dastard and coward act. It is a heinous crime against humanity, and an attempt to instigate Christian community against millions of innocent Muslims who does not support the minuscule belligerent, trigger happy and extremist religion bigots; and attempt to plunge the nation into unfathomable, gratuitous, and undesirable war.

“In our own estimation, no true Muslim has ever believed that Islam should be spread by the sword. Islam has always been propagated through its inherent qualities. Those who, calling themselves Muslims, seek to spread Islam by means of the sword are not aware of its inherent qualities and their conduct resembles the conduct of wild beasts.

“According to the Holy Quran, “Permission to fight is given to those against whom war is made, because they have been wronged—and Allah indeed has power to help them - Those who have been driven out from their homes unjustly only because they said, ‘Our Lord is Allah’—And if Allah has not repel some men by means of others, there would surely have been pulled down cloisters and churches and synagogues and mosques, wherein the name of Allah is oft commemorated. And Allah will surely help one who helps Him. Allah is indeed Powerful, Mighty”— (al-Hajj, 22:40–41)

“In view of the above, it should be remembered that Islam permits the taking up of the arm only in opposition to people who themselves take it up first. It was to fight in self-defence and to save Islam from extermination and to establish freedom of conscience and liberty of thought. It was to defend places of worship belonging to other religions—the churches, the synagogues, the temples, the cloisters; etc. It does not lay down that the Muslims while in a society that deals with them with justice and equity should take up arms against the society as rebels. According to the Holy Quran this is the way of the wicked and not of the righteous.

“The doctrine of Jihad as understood and propagated by the Muslim divines of this age is utterly incorrect. It can lead to nothing except that by their forceful preaching they would convert common people into wild beasts and would deprive them of all the good qualities of human beings; and so it has happened in this case of murderous violence against innocent Christians….”

The Campaign for Democracy (CD) in a statement by President Joe Odumakin also denounced the bombings.

THE CD said, “The bombings of worshippers in churches on Christmas day is most heinous and a total sacrilege that portrays the perpetrators as worse than the devil himself.

“We commiserate with all the bereaved families and the extended families of the four families totally wiped out in the attacks on the Catholic Church at Madala, Niger state.

“The CD is however troubled that these calamities were not averted in spite of prior warnings by the terrorists that they were going to do this on Christmas Day. This is an indictment of our security agencies and the vulnerability of our country to evil- minded people.”