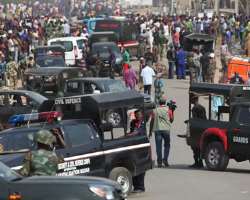 SAN FRANCISCO, December 25, (THEWILL) – At least five bombs exploded on Christmas Day in northern Nigerian with reports that about 40 persons were killed at the explosion at St. Theresa Catholic Church in Madalla, about 23 miles outside Abuja.


There were reports of blasts in Jos located in Plateau State and the SSS headquarters in Damaturu in Yobe State, where a suicide bomber rammed a rigged vehicle into a military convoy that had just driven into the SSS compound. The casualty figures are still uncertain.


One policeman was killed in the Jos blast while four Boko Haram members of Boko Haram were detained after police found four and deactivated four IEDs, according to the Police in Jos.


Boko Haram, a Nigerian terrorist group has claimed responsibility for the attacks.


President Goodluck Jonathan in a statement by his Special Adviser on Media and Publicity, Dr. Reuben Abati, condemned the blasts saying, “The bombing of innocent citizens on a day millions of people all over the World are celebrating the birth of Jesus Christ is a dastardly act that must attract the rebuke of all peace-loving Nigerians.

“These acts of violence against innocent citizens are an unwarranted affront on our collective safety and freedom.


“Nigerians must stand as one to condemn them.”