BIAFRA WILL BE REALISED WITHOUT WAR - 73-YEAR-OLD 'WAR VETERAN' 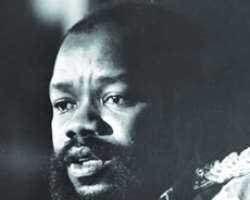 The war Veterans Social Welfare Association is the association of soldiers that fought the Biafra-Nigerian civil war under the command of the late Gen. Chukwuemeka Odumegwu Ojukwu. Registered with the Corporate Affairs Commission and integrated with the Nigerian Legion, the association was inaugurated by Ojukwu himself after the war.

The General Commander of the veterans, Col. Emmanuel Ossai, who hails from Aboh, Nokwa East LGA, Delta State, took over from the first commander, Col. Professor Awamadu, after the latter's death. In a memorable occasion, he was handed over the staff of office by Ojukwu himself on March 24, 2009.

In this interview in Enugu, Col. Ossai spoke on Ojukwu's death and the future of Biafra. He remains optimistic that Biafra would be reality through a peaceful means rather than a civil war. He also asserted that the best way to immortalise Ojukwu was by ensuring the realisation of the 'Republic of Biafra,' where he expects the portrait of Ojukwu to be used in the new Biafra currency.

Ossai recalled the exact words of Ojukwu the day he handed him over the staff of office in 2009. According to hi, Ojukwu said: 'You have to use this opportunity to do good things; wherever you go, you shall remember me. Let nobody claim the rank that does not belong to him; if you people live, I am living; anything you do must be taken to remember me; it pleases me; I am a member; as you go out remember that you are my followers; wherever you go I am there. Nothing can separate you from me; don't leave me; you are scattered because of greediness but if you are united nobody can scatter you; it's not difficult for me to be seeing you as often as you wish but if I do it will generate anxiety to others outside; but let them fear you; you are the bone with which the easterners stand.'

He said: 'Those were the words of a man of peace and unity for his people. Ojukwu never initiated war; he has never caused any problem in Nigeria but was forced to defend his people.'

What has been happening since you took the staff of office from Ojukwu?

He charged me with the initial responsibility of inaugurating commanders for the various zones within the old Eastern Region. I have been doing this and today we have people like Lt. Col Emmanuel Okpara commanding Owerri, Lt. Col Kalu Okam from Ebonyi State; also Lt. Col Elias Onah from Nsukka commanding the veterans from that area. Lt. Col Ambrose Ugwu is commanding Enugu. We have Lt. Col Simeon Ezepue for Nnewi; Lt Col Ukwuije, commanding veterans from Abia South and Lt Col Jim Mba, 85 Marine Obigbo, among others. Today, there is only one Biafra war veterans association and that is this one set up by Ikemba himself and which is led by my humble self. We are over 8, 000 and we are still mobilising our people.

Why are the veterans gathered here today?
The essence of the gathering is to mourn our leader; we have earlier completed seven-day mourning, but it continues until we get him buried. We want the world to know that he has left people behind, people he gave assignment; there are a few places that are yet to be inaugurated, but he is no more here to see the job completed. So, we are mourning him and we will continue to mourn him.

We keep organising ourselves. We talk to our follow veterans. We give them encouragement to take heart, assuring them that what God has promised us will eventually come to pass; because I have never seen a place where God promised something and failed to do it. He has promised us Biafra and surely we will get it. So, we keep on advising our fellow veterans, telling them that one day we will hear the name of Biafra being sung into our ears. Yes, Biafra has been given to us by God and it will eventually come. God revealed this to us and some prophets, that He has given us Biafra; that we should wait for it; and once God says something He must surely fulfill it. God doesn't promise and fail, He must surely fulfill it.

Now that Ojukwu is dead what happens to the veterans?

With the encouragement and training he gave us I think we can go ahead from where he stopped; there is no going back.

Who do you think can step into the shoes left by Ojukwu?

Uwazuruike can continue from where Ojukwu stopped. Before he died, he introduced Uwazuruike and handed over everything to him; that boy is doing marvellously well; he is doing very well. We take Ojukwu so high; he is a very courageous man; if he tells you this is this, that is the way it is. So, we don't joke with his words; whatever he tells us we uphold it.

Tell us about your war experience.
I started from Nsukka before they posted me to His Excellency's (Ojukwu's) Brigade; I fought there for some time before leaving for Calabar. When I got to Calabar, the moment the late Emeka Omeruah, the former governor, saw me he said 'oh, Ossai, you are the most experienced' and he sent me to Atana-Onoyon to replace Lt. Agbirigba; so I went there. I received special award from Ojukwu during the war. There was a wonderful operation I did in 1968 and Ojukwu ordered that I should be given honours award. Then, I was still a captain. It was at Nkana.

My colleagues were detailed to go and re-capture Nkana Bridge; the bridge was destroyed, so they went inside and then stayed there for days; they couldn't go there. It was on October 1, 1968 and I was just taking siesta when the spirit of God came to me and woke me up. When I got up, I asked my adjutant whether he called me he said no. I called Captain Ojoko of the Engineering unit attached to my battalion. I asked if he woke me up. He said no. I started thinking. I ordered the mortar officer to come and to tag digital targets immediately and then I asked the engineer to get me a ladder. I told them I must cross Nkana that afternoon. Within me I felt that it was God that woke me up that afternoon. I crossed that afternoon and I captured it.

So, when the Divisional Commander, Col. Uwakwe came, he was very happy; he embraced me; he kissed me and he took the news to Ojukwu at Umuahia and they prepared the award for my gallantry.

Why did Biafra lose the war?
We didn't have enough weapons and ammunition; we were patching up things; most times I normally sent most weapons I captured in the front to army headquarters. In the Nkana operation, the bombs I captured were sent to my division. Some were sent to my Brigade and we kept some for my battalion. The man in-charge of armoury then was Major Onyekwelu from Delta. He was in-charge of the armoury at Umuahia, and I handed those bombs to him. There were also saboteurs, who messed up our efforts; at times they would expose our plans to the enemy; that was why each time I planned my operation I was always successful because I didn't reveal it to anybody, even my officers. I will call operational orders at the 11th hour. By the time you know about the operation you won't have time to tell your girlfriend that you are going in for an operation.

There were also the economic blockades; all our borders were blocked, both land and sea. Most of the weapons we used were captured from the enemy. At times helicopter normally came to throw down ammunition for operation. What quantity do you think they can get?

Has the association received any form of support from the government of the defunct old Eastern Region?

No government in the east has shown us support. There has not been any aide from any government; the only time a governor came close to us was the day we went for Ojukwu's 78th birthday on November 4; we went to Enugu to celebrate his birthday; it was there that Governor Peter Obi of Anambra State came to my table to inquire who the commander of the veterans was. He came to my table and presented kola to us and gave us a N100, 000.

How, in your view, should Ojukwu be immortalised?
I think this can be done by naming many places after his name as well as molding emoluments. Above all, the realization of Biafra would be his greatest immortalisation. Once we get Biafra, our money will bear his portrait; no doubt about that.

What are your plans towards Ojukwu's burial?
We have discussed with the family and they have assured us that we would be invited to take part in the planning. Apart from that, we are going to put together a special parade for our General.

What was your worst experience of the war?
What I wouldn't like to remember about the war was the sufferings of the boys; most of them were fighting without uniform and on empty stomach. There was no food and the boys were harvesting and eating raw cassava and so on. It was a really bad experience and one I don't like to remember.

If there is cause for another war for Biafra, will you be part of it?

You man to fight war again?
Yes, maybe for the realization of Biafra?
We don't hope to fight war again; we are not expecting another war; we have handled war during our time; now we want peaceful demonstration for Biafra and we shall get it without war, by the grace of God.