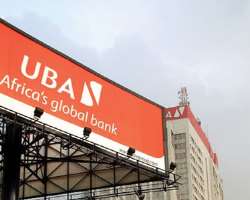 LAGOS, December 23, (THEWILL) - History was on Thursday made in Lagos in the ongoing UBA Lion King Savings and Rewards Promo, as Mr. Okorie Sunday Stephen, a savings account holder with the Bank won a million naira in the inaugural draw of the promo.

In the computerized draw held at UBA’s head office in Lagos, Okorie, whose account is domiciled in the Oke-Arin, Lagos Business Office of the Bank emerged the lucky winner out of 42,986 qualified entries. Seven other lucky customers amongst whom include Atumah Florence, Clement Archibong, Idiong Unwana Fidelis, Adam Yakubu, Theodore Tochukwu Emeh, Nwube Friday and Hamisu Ibrahim from different business offices of the bank, spread across the country, won the sum of N100, 000.00 (one hundred thousand naira) each in the super prize draw while 30 customers won consolation prizes of N50, 000.00 (fifty thousand naira each).

Speaking at the event, Chidi Okpala, Head, Retail Banking, UBA Plc said that the promo which will run for a period of 6 months with subsequent rollover option for another period of 7months will see 1026 savings account customers of the bank win cash prizes of between N50, 000.00 to N1million in 23 Weekly Draws. Also, 7 customers stand to win the sum of N5 million each in the Super Grand Draw. “As we get towards the end of the year which is time for celebration, we want to celebrate with our customers. We would be making millionaires out of some of them on a weekly basis,” he said.

United Bank for Africa Plc remains an industry leader in Retail Banking across Africa with 19 African countries of operation and over 7 million customers’ accounts. The bank has consistently grown its internet and mobile banking customer base coupled with undisputed leadership in local, regional and international remittances.