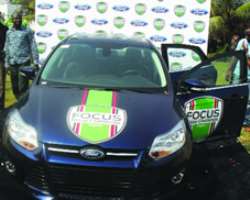 After weeks of tasking contests by grouped participants, the Ford Focus Relay Challenge hit a climax recently in Lagos when Team Yellow with on-air personality, Mannie, took the first position.The team won the ultimate prize of two units of the 2012 Focus.

'Yellow' triumphed having earned the highest cumulative points all through the four weeks of the challenge. The star prize of two units of Ford Focus went to two of the team's members, Azuka Mpi, a private school proprietress, and Tunji Meshioye.

The Ford Focus Relay Challenge kicked off in Lagos with weekly contests among four teams comprising a driver and co-driver. Each team's on-air personality served as captain and was always on hand to add healthy rivalry and drama to the competition.

During Week One challenge with the theme 'Find Your Focus,' the contestants were made to find their car in a crowded parking lot, and in doing so, highlighted the keyless entry feature of the car, after which they embarked on an obstacle course at the National Stadium, Surulere. This was aimed at testing their driving skills, as well as showcasing the pure pleasure of driving a Ford Focus.

They also competed on the Focus' active park assist function, which allows the car to park itself.

Themed 'Charity Challenge', Week Two's exercise required the contestants to get pit crew members and the general public to drop off various items at any of the two Ford-dealer designated drop spots. The contestants were then expected to properly pack all donated items into their Ford Focus and take them to designated charities. For the Week Three challenge, which came up on Saturday, December 3, contestants took their friends on drives, shuttling between Get Arena and the Palms, Lekki in the new Ford Focus 2012, with the winner being the team with the highest number of friends shuttled.

Apart from performances by a top hip-hop artiste, MI, and stand-up comedians, some highpoints of the grand finale which was held at the Oceanview Restaurant in Victoria Island. were special recognition of Ford Su-Saharan Africa representatives and the brand's distributors in Nigeria, as well as their comments on the Ford Focus and the essence of the Challenge.

Team Yellow's 'Don Chris' also bagged the incredible $8,000 travel voucher - a prize presented to him by Raju Sawlani of Coscharis Motors, one of Nigeria's biggest auto sales/service companies which has taken the Ford brand to great heights in the local market.