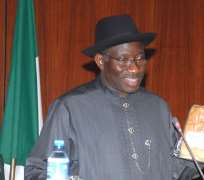 Unfortunately as the largest producer of cassava, we contribute less than 1% to world export, there is no functional statistics regarding production for local consumption, but somehow we expect that local bread consumption would be on the strength of cassava.

If you are trying to get my drift, just spare me some few paragraphs and we will see how 'unserious' our present leaders can be.

Budgets ala PDP have come with one cliché or the other, Budgets of reconstruction, infrastructure, change, hope, and many more. We are witnesses of how the lack of adherence to these budgets has brought retrogression. Each budget has come with more delusion for the ordinary Nigerian than the previous one.

All the noise of macroeconomic policies, reforms and the usual economic jargons has been at most a sing song in the ears of the experts, a dance in the pages of newspapers, but the reality still stares us in the face, as poverty, deprivation and want take center stage in a land of plenty...the land of not just oil but cassava.

Painfully those that we have entrusted with leadership tell us that we have made considerable progress. And to think of it, who says that we have not, from the era of very few billions, infact one recalls when the budgets of Kano and Lagos states, was short of a million. But these days we are in the era of trillions.

A friend even noted in recent times "we don’t see any more elephant projects like it used to be in the past, that way we could justify the monies". Instead the nation is fleeced through phony consultancies for projects in ghostland...strange overheads and one can only wonder for how long this government magic would continue.

Now for all the billions and trillions, a motor park, poultry, cutting of grass in the government house is part of the government's successes.

“Our collective challenge today is to translate macro-economic gains into tangible improvements in the living standards of our people. Despite the rapid growth of the economy, about 50% of our population still lives below the poverty line. Oil still accounts for about 40% of GDP, 90% of exports and 80% of government revenue. The challenge therefore is to reverse these ratios”. Those were the words of late Yar’Adua in his first budget speech.

With the Jonathan cassava budget, the challenges are still the same; the only change is an increase in the population living below the poverty line.

The cassava budget will still be plagued by “poor public expenditure management and lack of transparency, accountability and value for money.

Billions will go into energy; Nigerians will not see a change in the power sector, billions into the health sector, that won’t translate into improved health care delivery. Billions for education but ask ASUU, the students, look at the laboratories, infrastructures, the quality of graduates and you certainly will agree that even the 8% is a pre-arranged credit shop, little to show for…

How can this budget touch the lives of the ordinary Nigerian, when the bulk of the monies will as usual go into allowances for, transport, newspaper, girlfriends, and concubines for the elite…a glance into the salaries that our political office holders earn is enough to instigate a revolt but we patiently wait and watch, hoping against hope?

The more money the nation has made, the more the people suffer, a bitter irony. Will Nigerians enjoy a few hundred in these trillions? Will this budget not go the same way again, to the capitalists by accumulation in our midst, those few men and women, who wallow in their gluttonous living and tell us that all is well while we die?

With this cassava budget, will our roads be better; will we see rapid infrastructural development, improved workers welfare?

An investigation as conducted by a local paper that year revealed that the same amount (N17.1m) could be used to build four units of a modest three-bedroom bungalow in areas outside the Abuja city centre.

However, this does not include a separate N127.6m budgeted for meals to be served during summits, conferences and banquets to be hosted at the State House.

In 2007 N1.5m was spent providing reading glasses for Presidential aides that are domiciled in the Presidency. When aides of a president cannot see, what do we expect in terms of policy thrust other than blind trust? We just follow-follow, if they give cassava bread we take, if tomorrow they say its yam bread we follow till there is no bread at all.

The SGF, Pius Anyim had promised they would receive their medals and certificates "in the next one week."

A government that could not adequately cater for 355 persons, a government that cannot keep a one week promise, how is that government going to keep a promise of several billions and trillions to over a hundred and fifty million people?

This is the government whose charge de affaire claims he will be eating cassava bread all the way...I dare my president and his men, just one question...show me 15 Bakeries in 15 states that make solely cassava bread and are making profit, as a result of adequate power supply, has good road network for the distribution, and pays its workers well. Mr. President, time will tell, whether you were wrong, or we maybe just did not like you...Time will tell.