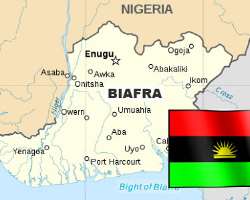 It is sad enough to commit mass murder on an ethnic group of people with the expressed intention of completely exterminating them off the face of the Earth. That is what Nigeria and its citizens did (and are still doing) on the Igbo and other Biafran ethnic groups between 1966 and 1970. By the conclusion of that Nigerian genocidal campaign on the Biafran population, more than one quarter of the total population was murdered – exterminated. That fraction translated to 3.1 million children, women and men of Biafran ethnic peoples that were ethnically cleansed by the Nigerian Islamic state and its people. Let’s not be mere passive readers. As a mental exercise, we can try to imagine the dead bodies of this Nigerian Genocide victims littered across the landscapes of the entire BiafraLand and parts of Nigeria. I don’t care who you may be but I can assure you that no one will remain the same after seeing this sight of absolute terribleness (even if it is only in one’s mind); the unconscionable carnage visited on a people by their supposedly fellow citizens of the same country.

But from the actions and utterances of so many Nigerians of all shades it appears that they are simply reprobates; beyond any human feelings and cannot be redeemed from this road to the abyss that they are on. Nigerian nationals, as sadists of the highest order, have neither remorse nor any residue of humanity in them, so the consequences of their sinister actions make no difference to them. Either as scam artists or brazen murderers, like base beasts they just exist in a semblance of human society while in actual fact they are mere hordes of brutes. Does the reader need any more proof of this assertion then listen to this person, a lawyer of Nigeria’s Supreme Court, in his own words: “If they [the Igbo] attempt the same thing again, we shall wipe them off the surface of the earth. Ebi loko yin (starvation is your [their] albatross).”--Kunle Adegoke LLM, BL, Solicitor & Advocate of the Supreme Court of Nigeria. Phone number: 234-802-333-7003. The author of this statement is talking in reference to the Igbo/Biafra’s secession from Nigeria in 1967. Then Igbo’s and other Biafran’s existence on Earth was threatened by the Nigerian state and its citizens and in self defense/Self Determination Biafrans declared their independence from Nigeria on the 30th of May, 1967.

It will be erroneous to think that the author of the statement above was being reckless and carefree. Nothing can be further from the truth than that. The man was uttering a calculated and carefully crafted plan of action by him and his people and their country. You can find out the truth of this statement from the multiple evidences which abound from records that are available everywhere that one turns. If this statement were coming from someone other than a Nigerian then one would have been less alarmed and maybe somehow hope that it is just an empty threat. But what makes it very dangerous and not to be taken for granted is that it is coming from a Nigerian, an advocate of that country’s Supreme Court of Justice. With this threat in the open there are two things that Igbo people can do in this situation, 1. Resign themselves to their usual fate in Nigeria and wait patiently for the hatchet aimed for their neck because, as sure as the sun will rise tomorrow, it is coming for them. The swung ax will continue to fall without miss so long as Igbo/Biafrans remain part of the Nigerian entrapment; Nigeria and Nigerians will always make good this threat. Or the second and, what any sane person will consider the wiser option, is that they should leave Nigeria now and be separate in their own sovereign and independent state of Biafra.

If they chose to take the later course of action, they would be spared the endemic threats and actual destructions of their lives and properties because they will be removed far away from this their albatross and source of sure danger and secured by the international sovereign boundaries of their own nation state. Nigeria is Igbo’s albatross and every Nigerian is a danger to and potential murderer of the Igbo. And with this as an incontestable fact it is only sensible that every Igbo/Biafran person must do everything in their power to avoid every Nigerian as he (the Nigerian) is always out to kill him (the Igbo). Of course for those one-Nigeria apologists who are of Igbo/Biafran origin they would wish that it were different but unfortunately for them it is not. Try to rationalize it in any way you can, all the evidences are very self-evident and visible every which way that you turn and can be perceived even by a blind and deaf person.

For all those who are still in doubt, let them be the judge in this case. If a Nigerian lawyer, a member of that country’s bar association and an advocate of the highest court in that land could be so audacious and come out to the people’s court, (the public place) and thump his chest to boast as a mouthpiece for his country’s justice establishment of, how they will deal the most complete and final blow to the Igbo race, then what is left for the Igbo people in Nigeria that they are still waiting to pick up before they leave Nigeria for good to be on their own? Some would want to dismiss this as crying wolf, but don’t we have it on record of how these same Nigerians have carried out these threats of total extermination in the past on Igbo people? And for those Igbo/Biafrans who still want to wait it out in the disastrous one-Nigeria, they are yet to prove how in the past they have successfully countered these executable threats to their existence. The only reasonable, honest and sincere answer to this sword of Damocles (Nigeria’s act of genocides) hanging over the Igbo/Biafrans in Nigeria is to remove their necks far away from the reach of the destructive association with Nigeria and Nigerians.

Do we hear someone asking how they can do this? There are quite a few options. 1. Biafrans can remove themselves from Nigeria and out rightly declare their independence. There is a verifiable example of such step in Kosovo. 2. Conduct a plebiscite or referendum where the people cast ballots to show where their citizenship allegiance lies. In this case we have the example of Sudan and South Sudan to go by. 3. Embark on an all-out war with Nigeria: Fight to redeem themselves and the future of their children. And we have the example of Ethiopia and Eritrea to guide us in this option. Whichever way that Biafrans want to go, they must take action today as they cannot afford any further minute of existence in the deadly union with Nigerian. Any continued stay in Nigeria only spells dishonor, dehumanization and death for Biafrans and their children.