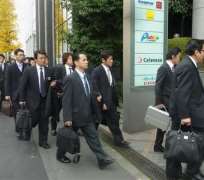 Other teams were seen waiting patiently to be buzzed inside a luxury condominium - the home of a former company president - and piling from a van in an underground car park at Olympus' high-rise headquarters.

The raids, telegraphed in advance to the media, are part of a rare joint probe by Tokyo prosecutors, police and financial regulators targeting the 92-year-old company, which has admitted to concealing investment losses via questionable M&A deals and other accounting tricks stretching back over two decades.

Investigators moved into high gear after a panel of experts appointed by Olympus to probe the scandal said early this month that two senior former executives masterminded the scheme with the help of investment bankers.

It also found that three ex-presidents, including Tsuyoshi Kikukawa who resigned in October over the scandal and whose condo home was raided Wednesday, knew about the cover-up.

Olympus acknowledged the raids in a statement.
"We will continue to cooperate fully with investigative authorities in order to bring the facts to light," it said.

"We would again like to apologize deeply for causing great trouble and worry for our shareholders, investors and those we do business with."

The company could still face delisting if the exchange deems that the company's accounting deceit was sufficiently grave.

Ex-CEO Michael Woodford, who blew the whistle on the scandal after being fired in October, is campaigning to get his job back, but faces long odds in his battle with current management, which is expected to get backing from its bankers for a plan to bring in outside investors to bolster the company's finances.

"I'm tremendously sad that it's come to this, especially when it could have been avoided depending on the actions of upper management," Olympus employee Masaharu Hamada said outside the company's headquarters as it was being raided.

Hamada has taken legal action against the company in a case unrelated to the accounting scandal, charging that he was subjected to harassment by management after reporting a compliance breach by his supervisor. A Tokyo court has ruled in his favor and the case is now going to the high court.

Several dozen reporters and TV crews waited near the entrance to Olympus' headquarters after word leaked that raids were likely during the day, although the investigators chose to make their entrance via the underground garage. Local media said prosecutors also visited the homes of other former executives.

Media are often tipped off ahead of prosecutors' raids so that TV cameras can film them.

The shares had been under pressure as expectations of a capital raising by the company to shore up its finances stoked fears that existing shareholdings would be diluted, but the market's attention has shifted to the company's finances and future prospects.

"It's becoming likely that Olympus will stay listed and there's already talk of a capital injection," said Tetsuro Ii, the president of Commons Asset Management, adding he didn't think the prosecutors' raids or any subsequent arrests would have a major impact on the stock.

The market took a favorable view of a media report on Tuesday that Olympus plans to issue about 100 billion yen ($1.3 billion) in new shares.

Japanese high-tech blue-chips such as Sony and Fujifilm are seen among possible buyers of new Olympus shares, the sources said.