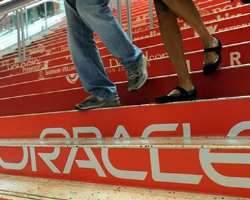 Oracle Corp's earnings fell short of Wall Street's forecasts for the first time in a decade as software and hardware sales sputtered, sending its shares down more than 10 percent and stoking fears a global recession will hurt tech spending.

The rare slip-up by the world's No. 3 software maker raised questions about the health of the technology sector as many companies in the industry gear up to close deals before the end of 2011.

Oracle joins a growing list of companies, including some of technology's biggest and oldest names, whose results and earnings forecasts have raised alarm bells about worsening business conditions.

They include Hewlett-Packard Co, Dell Inc, Red Hat, Intel Corp, Texas Instruments and NetApp. Shares of HP and Dell were down about 1 percent in after-hours trade, while two of Oracle's fiercest rivals in the software world, Salesforce.com Inc and Germany's SAP, were down 2 percent to 4 percent.

Oracle was among the first major technology companies to report results for the quarter spanning November, offering the latest snapshot of the state of worldwide IT spending.

The results were disappointing across the board. The company missed targets on profit as well as hardware and software sales, and offered weak current-quarter forecasts.

Oracle played down the long-term impact of the miss, blaming increased scrutiny of technology investments by cautious customers.

Some clients began requiring that purchases be approved by more senior executives than in recent years, prolonging the time it took to close sales, Oracle President and Chief Financial Officer Safra Catz said in a conference call.

That prevented the software maker from securing some deals during the crucial closing weeks of the quarter, she said, adding that Oracle has adjusted its forecasts to accommodate a lengthier approval process and expects results to be "significantly better" in the current period.

Yet analysts warned that the heightened scrutiny may be a symptom of a more serious issue: that businesses are cutting back on tech spending.

"Companies around the world are slowing their approval process for projects," said Fred Hickey, editor of the High-Tech Strategist investment newsletter. "That's what happens in downturns. Companies slow their spending. They slow their approvals."

RECURRING REVENUE
Oracle, run by outspoken billionaire Larry Ellison, posted an unexpected sequential decline in the revenue it gets for providing maintenance for its software products, one of the most lucrative parts of its business.

That hasn't happened since the fall of 2008, when the financial crisis began with the collapse of Lehman Brothers, said Cowen & Co analyst Peter Goldmacher.

"Tech spending is more under pressure than people thought," Goldmacher said. "IT budgets have been relatively flat, when you have issues like you do in Europe, people naturally pull back."

Signs are emerging of a widening global economic slowdown as Europe, which experts say is headed into recession, gropes for a solution to its over-indebtedness.

Oracle has heavy exposure to the region.
New software sales rose 2 percent from a year earlier to $2 billion during the quarter. Analysts, on average, were expecting $2.2 billion, according to StreetAccount.

For the current, fiscal third quarter, Oracle forecast new software sales growth of zero to 10 percent, compared with an average forecast for about 7 percent growth, according to StreetAccount.

The company also reported that hardware product sales fell 14 percent to $953 million, below the average StreetAccount forecast of $1.06 billion. On Tuesday, Oracle executives told analysts on a conference call that the company expected hardware revenue declines of between 5 percent and 15 percent. StreetAccount had compiled an average forecast of a dip of 0.5 percent.

"Every technology company is going to get hit. This is just the start," said Global Equities Research analyst Trip Chowdhry.