WHY MURPHY AFOLABI'S FRIEND DON'T LIKE HIM ANY MORE 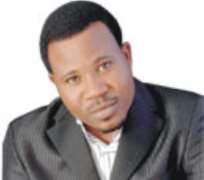 Murhy Afolabi is that Yoruba movie star that left his Ogun State base to come to Lagos to conquer Lagos and did he succeed? Yes,he did,though it was not instantly but with perseverance and hard work,he was able to get to the top.

Today in the industry,Murphy Afolabi has grown to be a movie producer,and movie director aside being an actor.

Like magic,he grabbed the listening ears of the marketers which made them release funds to him to produced movies.His movies incidentally became master pieces and always thrilling.

A unique aspect of his movies is that he tends to specialize in experimenting with the terrestrial powers and this many has attributed to his upbringing.

Since Murphy Afolabi had the ears of the marketers,he produced movies more than his friends.In those days,he carried all his friends along in his productions especially his very good friend,Lukmon Raji whom many claim they came to Lagos together from Oshogbo in search of the greener pasture.

Lukmon in those days always got prominent roles in every of Murphy's movies.Not only that,Murphy also assisted him in getting favor from movie marketers who sponsored his movies which Murphy not only played the lead roles but also directed.

But recently things seem to have fallen apart between the two jolly friends as they no longer do things together.

Lukmon Raji has moved on and is doing things on his own without the involvement of Murphy Afolabi as those in the know said Murphy has now grown pompous and sees himself as a Lagos big boy who has arrived.

Not only that,when his friends produce movies in which he features and directs,he gets the larger chunk of the total cost of production and when it is their turn to feature in his own movies,he pays them peanuts and most times,owes them and when they raise the issue,he is said to be quick in reminding them that he is their benefactor and that they should take whatever he offers or at times he will promise to pay and he won't and the bill keeps mounting.

When Lukmon couldn't take it any longer,he walked away and started doing things on his own.

Another of his friends that cannot but be in Murphy's movies before now is Kelvin Ikeduba and like Lukmon,Kelvin has moved on to a much more stronger ally in the industry,Glo ambassador,Odunlade Adekola.

Kelvin is said to always be in company of Odunlade now that he is gradually becoming an hot item in the Abeokuta movie caucus as he gets patronage on the prompting of Odunlade as Abeokuta is Odunlade's base.