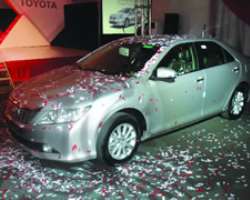 • New Generation Camry basking in limelight at the lauch in Lagos

For a car that has consistently made waves across the world for close to 30 years, the Toyota Camry is easily one of the most successful executive sedans ever made. In Nigeria, as in its home country (Japan), the United States and many other countries, it has for many years ranked high among the best-selling midsize sedans, with quality, safety, fuel economy, durability and high residual value as some its qualities.

Perhaps, this explains why any time a new Camry is unveiled, the question among Toyota lovers is usually 'what is new?' and never 'is it good?'

The situation was not different recently at the Lagos venue of the launch of the Seventh Generation Camry by the authorised distributor, Toyota Nigeria Limited (TNL). Many a guest was confident that the Camry that was about to stage a debut would be typical, but the question remained:

What is new?
By the time two units of the car rode into view amidst cheers and a rain of confetti, answers to some of the curious questions became evident. Apart from being imbued with a quieter ride than before, the 2012 Generation Camry has benefitted from a sophisticated new design and now has a more spacious interior,

Still on 'what is new/?' TNL Marketing Manager, Mr Bayo Olawoyin, had in a presentation disclosed that the formerly 2. 4 litre engine version had been upgraded to 2.5-litre and the gear from five-speed to six-speed with an improvement in power output, but without compromising on fuel economy.

The 3.5 litre engine variant has also been similarly empowered with commensurate raise in trim execution as evident its extra features. Olawoyin who traced the Camry's trajectory of success and unique qualities since the early 80s, confirmed to the excitement of the car enthusiasts that the car has grown bigger, longer and even more endowed. For instance, the new Camry is now longer by 10mm and wider by 5mm.

Expectedly, while welcoming guests to the launch, the Managing Director of TNL, Mr. C. K. Thampy, poured encomium on the new Camry, describing it as another masterpiece from Toyota to the brand's admirers. The New Generation Camry, he stressed, reflects the Customer First policy of Toyota Motor Corporation. The policy, according to him, is targeted  at 'continually connecting with the ever growing tastes and desires of their customers by introducing models that were at par with current trends in the  world markets'.

Reiterating Toyota's commitment to providing its stakeholders with benefits of modern automotive technology, Thampy assured that the 2012 Camry would give its users satisfaction through very impressive performance. He added: 'In totality,  with its improved aesthetic endowments over its predecessors and its contemporaries, the new generation Camry is a well packaged auto invention, an assemblage of what truly constitutes the hallmarks of luxury in motion, a symbol of corporate and stately presence that exudes and personifies the confidence of its owner'.