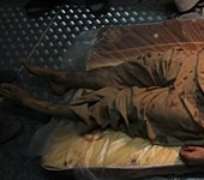 Speaking in his annual televised phone-in with Russians, Putin accused the US special forces of being involved in Gadhafi's killing, the first time Moscow has pointed the finger at Washington.

'Who did this?' Putin asked. 'Drones, including American ones.

They attacked his column. Then using the radio through the special forces, who should not have been there they brought in the so-called opposition and fighters, and killed him without court or investigation.'

But in it's reaction, Washington said yesterday it was 'ludicrous' to accuse it of a role in the killing of Gadhafi. 'The assertion that US special operations forces were involved in the killing of Colonel Gadhafi is ludicrous,' US Defence Secretary Leon Panetta's spokesman, Captain John Kirby, told AFP.

'The killing of Gadhafi has been very well documented publicly the circumstances surrounding it and whom in fact was responsible for it,' he said in Baghdad where he was accompanying the Pentagon chief for a flag-lowering ceremony marking the end of the war in Iraq.

'The circumstances speak for themselves on how Colonel Gadhafi met his fate,' added Kirby. 'We did not have American boots on the ground in the Libya operation. All our support was done through the air and on the seas.'