WARNING AGAINST EVIL OF INTOXICANTS 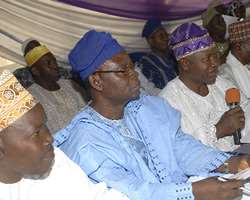 Photo:Sun News Publishing
More Sunlight of Islam Stories
O people! Be pious and conscious of Allaah and enjoy the good things that He has made lawful for you. Be grateful to Allaah by carrying out the duties that He has enjoined upon you. Gratitude is a necessary condition for the perpetuation and increase of the bounties of Allaah.

O people! Beware of making use of what Allaah has made unlawful unto you. He has only forbidden that which would harm you concerning your life and religion. Allaah is indeed the All-Compassionate, the Ever-Merciful.

One of the most harmful things that Allaah has forbidden, and the Muslim jurists have therefore reached a consensus on its unlawfulness, is Khamr, or alcohol and all other intoxicants. Prophet Muhammad (peace be upon him) has described Khamr as: Ã¬The source of all abominable matters. He is also reported to have said: 'It is the gate to all evils. Concerning Khamr, the Glorious QurÃ­an describes it to be: 'Defilement from the work of Satan, so avoid it that you may be successful.' (Al-Maa'idah: 90).

There are many Ahadeeth forbidding the consumption of Khamr, of which some are:

The Prophet Muhammad (peace be upon him) is also reported to have said: 'A person is not a (true) believer while he is engaged in drinking (alcohol).' It is also narrated that he said: 'An alcohol-drinker will meet Allaah (on the Day of Judgment) as if he was an idol worshiper.' He also said: Allaah has certainly made a covenant with those who drink Khamr that He will make them drink 'Teenat Al Khabaal' so some of his companions asked: 'What is 'Teenat Al Khabaal?' and the Prophet replied: It is the sweat or discharge (of cyst or blood) of the denizens of the Hellfire.

Whoever drinks Khamr will have his worship (salat) rejected for forty days.'

Khamr, in the Arabic language, is a general word signifying anything, regardless of type, that befogs the mind and causes intoxication. As far as its harms are concerned, Muslim jurists, physicians, psychologists as well as sociologists have mentioned many harmful effects resulting from the consumption of alcohol. Some of those effects may be outlined as follows:

•Khamr hinders a person from the remembrance of Allaah and the performance of daily prayers. As an alcohol-drinker is very closely attached to his drink, he has great difficulty in attempting to leave it, and if he were to leave it, he would be extremely nervous, tense and irritable as a result.

•It incurs severe punishment and painful chastisement in this life and the next.

•It causes many physical diseases and ailments such as stomach ache, abdominal distension, abnormal protrusion of the eyes (exophthalmoses), disfigurement, pulmonary tuberculosis, intestinal ulceration, as well as cirrhosis of the liver. It also hastens senility, affects the mind and weakens oneÃ­s consciousness at the time of intoxication. It can even lead one to lose his mind altogether.

•It harbours hatred and kindles the fire of resentment and hostility among alcohol-drinkers and between them and their companions. Alcohol-drinkers always feel depressed and are never happy unless they are in the company of other drinkers. The smallest word can infuriate them and stir their blood.

•It erases virtues and undermines oneÃ­s morality and chastity.

•It incites one to commit adultery or fornication, practice sodomy, and perpetrate other heinous crimes. The Prophet has therefore labelled Khamr as: The source of all abominable matters and a gate to all evils.

•It depletes ones money and drains ones wealth until it makes one destitute. It may even cause a person to sacrifice everything, even his/her honour to get it.

When Khamr was prohibited, the Prophet ordered people to pour it out in the market places and to break the bottles that it was stored in. Likewise, Caliph 'Umar Ibn Al-Khattaab, may Allaah be pleased with him, who was the Commander of the Believers, burnt down the house of a man called Ruwayshid (i.e., guided) who used to trade in alcohol, and said him: 'You are not guided, but a misguided transgressor.'

Hashish falls under the category of Khamr, yet it is more detrimental than alcohol from the viewpoint of intoxication and befogging of the mind. It corrupts a manÃ­s character, undermines his decent manners, erases his sense of modesty, and ultimately, causes his sexual desires to run out of control. These foregoing dangers, whether obvious or not, and regardless of whether they appear quickly or otherwise, are the grave consequences of alcohol and intoxicants in this world; but the punishment of the Hereafter is more severe and strict, since no one can escape unless he or she regrets and turns repentant to Allaah; may Allaah save us from undergoing such affliction.

Allaah says: 'O you who have believed! Indeed Intoxicants, gambling, [sacrificing on] stone alters [to other than Allaah], and divining arrows are but defilement from the work of Satan, so avoid it that you may be successful. Satan only wants to cause between you animosity and hatred through intoxicants and gambling and to avert you from the remembrance of Allaah and from prayer.

So will you not desist? And obey Allaah and obey the Messenger and beware. And if you turn away Ã± then know that upon our Messenger is only [the responsibility for] clear notification. (Al-Maa'idah: 90-92).