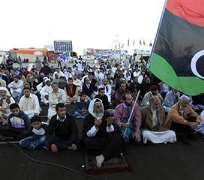 The death of former Libyan leader Muammar Gaddafi, who was captured and killed by rebels in October, may have been a war crime, the chief prosecutor of the International Criminal Court said on Thursday.

"I think that's a very important issue," he said. "We are raising this concern to the national authorities and they are preparing a plan to have a comprehensive strategy to investigate all these crimes."

Under pressure from Western allies, Libya's National Transitional Council has promised to investigate how Gaddafi and his son Mo'tassim were killed.

Mobile phone footage showed both alive after their capture. The former Libyan leader was seen being mocked, beaten and abused before he died, in what NTC officials said was crossfire.

The U.N. Security Council referred Gaddafi's crackdown on pro-democracy demonstrators to the ICC in February and authorized military intervention to protect civilians in March. The ICC indicted Gaddafi, his son Saif al-Islam and the former intelligence chief for war crimes.

Saif al-Islam is now in the custody of the Libyan authorities who have said they plan to try in him in Libya instead of handing him over to The Hague-based ICC. Moreno-Ocampo has said this was possible.

Moreno-Ocampo has also said he was investigating allegations that the anti-Gaddafi forces and NATO were also guilty of war crimes during the civil war.