EDUCATING ACHUZIE ON THE 'BIAFRAN DREAM' 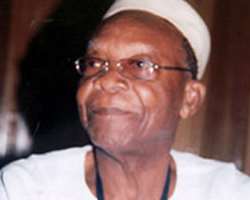 In an interview of Colonel Joseph Achuzie of the Biafran Army by Tony Ita Etim of All Africa.com published on December 10 2011 captioned “Ojukwu’s Death, Not End of Biafran Dream”, Achuzie is quoted as saying:


By these statements, Achuzie, on the surface, mars what otherwise was and still is for the most part a factual even if personal account of how Dim Ojukwu became the “Ojukwu of Biafra.” This account, with the exception as noted, is so accurate that any author or person who labeled or labels Ojukwu a “rebel leader” or “secessionist” or “warlord / war-monger” immediately betrays his or her own ignorance of historical facts. Young Igbo, other Biafrans and the rest of Nigeria, along with the world of parroting lazy reporters and journalists should learn and take note of how things really came about that Dim Ojukwu led Biafra. It is only a pity that it took Ojukwu’s death to get people to say, hear or learn the truth of these matters.


Yet, doing such a huge favor (setting the history straight) for posterity does not in any way make up for the faulty interpretation by Achuzie of what he terms the “Biafran Dream”, presumably, Biafra and what Biafra stands for to the Igbo and other Biafrans. The Igboman never dreamt Biafra as his “quest for a place in Nigeria”—greater Nigeria or lesser Nigeria: no! The Igbo know Biafra as a place not in Nigeria, not of Nigeria, not by Nigeria—a place completely separate and set apart from Nigeria: a Sovereign Independent Nation. In fighting for and defending Biafra, no Biafran soldier or civilian or citizen known to us thought that he or she was fighting to continue to cling to being part of Nigeria, or fighting and dying to stop him or her from being kicked out of Nigeria by Nigeria. No Igbo or Biafran citizen died during the Biafran war just so he or she should be accorded the privilege of “hav[ing] equal say with every other component part [of Nigeria]…”


If in fact Achuzie’s claim is correct, and if his fellow top military leaders of Biafra then indeed shared his view as such, one could see why Biafra lost the war. Is this a “Freudian slip” which fully explains how Biafra lost a moral war? Imagine the scenario: Colonel Achuzie was commanding Biafran soldiers asking them to fight and die so that they could reintegrate themselves with Nigeria which was already killing them and pushing them out of Nigeria and annihilating them in order to accomplish their erasure from Nigeria and even from their own ancestral land. (Even by the Colonel’s own admission this is an accurate description of the prevailing circumstances then.) Does this make sense to anyone? Let’s put it another way. Nigeria does not want the Igbo and other Biafrans in Nigeria, sets out to push the Igbo and other Biafrans out; succeeds in driving the Igbo and other Biafrans back to their own ancestral lands, goes a step further and destroys them in their own homeland and dispossess them of their life and property. The Achuzie’s of Igbo and Biafra respond by rallying the Biafrans to fight, not to defend themselves, their honor and dignity, not to protect their own land and way of life, but to embark on a quest to rejoin and claim the same Nigeria and cling to the same Nigeria? Can you now see why the Obasanjo’s and Gowon’s of Nigeria taunt and mock the Igbo and other Biafrans?


Achuzie’s statements signify a betrayal of the Biafran Cause and all of his colleagues who prosecuted the Biafran war with the goal that we the Igbo and other Biafrans were only fighting to get back to Nigeria must regard themselves as betrayers of the Biafran Cause also. When I fought in that war as a proud Biafran foot-soldier, ragtag, hungry and without a rank, I fought for Biafra, as did the rest of “we band of brothers”; I would have died, happy joining felled Biafran soldier-heroes, and in so doing, a Biafran to the end, a Biafran forever, for Biafra eternal. None of the people that I know from the Biafra war era fought or endured for anything else but Biafra—for our own country where no one could reject us or drive us out; where no one could slow us down in our pursuit of individual and collective progress, excellence and fulfillment. That is the authentic Biafra—and it is not just a “dream”; it is our ultimate destiny; we welcome it and look forward to it as our reality.


None of the foregoing should be taken lightly, for we now know why—thanks to Achuzie—the war was lost by Biafra. Biafran leaders had their own ulterior motive: an agenda to return Biafrans to Nigeria, unbeknownst to the Biafran masses who were genuinely fighting with conviction for Independent Biafra. Little did the masses suspect that their own so-called leaders were intent on moving them back to Nigeria, though they never doubted that their effort and sacrifice was for Biafra, to this day. Consider this an epiphany.

The story of the Moth and the Flame has become the story of the Igbo and Nigeria. This story always ends the same way, an outcome one hundred percent predictable. It is to be hoped that the Igbo have a little more sense than the doomed moth, where once again Achuzie has reminded us of the difficulty in entertaining, never mind realizing, such a hope. Today, the Igbo are being killed in scores, hundreds and even thousands in other parts of Nigeria, especially in the North; the lucky ones escape, driven out of their holdings and forcefully pried off their clinging from those areas, now mere walking human shells and gaping wounds and ugly scars trying to limp home. Yet, Achuzie tells them to fight to stay on and continue to fight to be accepted by those who would not only reject them but, truly want to kill them—and succeeding at it, too. All this, so that they, the Igbo, could find “a place in [Achuzie’s] greater Nigeria”? This is the “Biafran Dream” which Achuzie says “lives on”?


Igbo so-called leaders today come in “shades of Achuzie.” They still act like they are dreaming Achuzie’s illogical Dream which makes no sense at all, and they are fulfilling such a dream of always fighting to belong in Nigeria. Have you talked to Uwechue at any time? What about our famed Achebe? They are all one-Nigerianists and they want to keep the Igbo delivered to Nigeria at any cost. OHANEZE wants one-Nigeria for the Igbo in perpetuity and acts as a one-Nigerian institution. Yet these examples will articulate with accuracy the sordid details of what the Igbo have suffered at the hands of Nigeria; as we can see, Achuzie had no problems there either. Remember WIC (World Igbo Congress)—any faction of it? WIC is a special case. WIC is purely one-Nigerian; its leadership and membership will not even bother to acknowledge the ceaseless suffering and injuring of Igbo people by Nigeria. Visit their Internet forums and weep for the reason of the extent to which they are living Achuzie’s Dream. What a pity that at the death of an Igbo leader, that he loved the Igbo is the assumption; that he also loved Nigeria is a fact; the only remaining question is whether he loved Nigeria more. This is indeed a great pity. The Bible says that when the fabled Moses died both the Angels and the Devil showed up to claim his body/soul: can you imagine what a tragedy? What does it mean, what does it really say, that Nigeria, an unrepentant, unremorseful, still taunting enemy should have a good cause to show up to claim anyone of our leaders when Biafra or at least, Igbo, is his true legacy?


There is an Igbo proverb which goes something like “do not pick out and eat the meat if you already reject the stew.” On the surface, one would think that this is wise counsel designed for Nigeria concerning the Igbo: leave the Igbo alone to go their own way since you have already rejected what they are. While that is indeed proper counsel, the proverb is really for the Igbo. It is the people’s counsel directed to Igbo leaders. It is the veritable advice from the people who believe and know only Biafra, to their so-called leaders who already know that we have, for good reason, turned our back on Nigeria: let them not look back there. It is also a reminder to all Igbo and to all Biafrans: get your fingers out of Nigeria.


Our people want Biafra, not Nigeria, not any part of Nigeria. Take note of that, Colonel Achuzie. When you dream your dream of Nigeria, it is not a “Biafran Dream”; it is your own personal, shall we say, “nightmare.” Our people fought for Biafra; that you defeated their desire by using them and leading them back to Nigeria is not a victory for any party. The current events in Nigeria and in Biafraland, as well as since the end of the war, continue to prove how insane your Dream is, a disaster of unimaginable proportions. These same events reinforce the wisdom of our people to leave Nigeria and be in their own secure homeland and space. Our people continue the fight until we re-actuate Biafra, our only destiny. Any Igbo who cannot understand this is un-teachable.