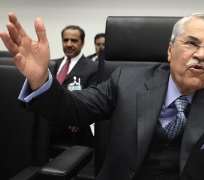 OPEC oil producers on Wednesday sealed their first new output agreement in three years in a deal that settles a 6-month-old argument over supply policy firmly in Saudi Arabia's favor.

The Organization of the Petroleum Exporting Countries agreed a target of 30 million barrels daily, ratifying current production near 3-year highs. It did not discuss individual national quotas.

The deal vindicates Saudi Arabia after its proposal to raise output in June to stem rising prices was rejected by price hawks led by Iran, Algeria and Venezuela.

"For the Saudis it's a fantastic decision," said Jamie Webster of Washington consultancy PFC Energy.

Saudi said it pumped 10 million barrels a day last month, 25 percent above its old OPEC quota, in what Gulf delegates said was a demonstration of strength to the price hawks ahead of the meeting.

In theory the agreement caps output for all 12 OPEC members for the first half of 2012 at levels that should permit a modest rebuilding of lean global inventories.

"We're not going to bypass it, we're going to adhere to it," promised OPEC Secretary General Abdullah al-Badri of the new supply limit. "Saudi Arabia will abide by this decision for sure."

That will depend on whether or not Saudi and its Gulf Arab allies decide to ease back supply as post-civil war Libya heads towards full production or keep the taps open to drive oil below $100 a barrel.

Saudi Arabia did not allay doubts about its intentions.

"If Libya increases it doesn't necessarily mean Saudi will cut," said Saudi Oil Minister Ali al-Naimi. "We don't react to that, we react to market demand," he said.

"Someone has to cut back to accommodate Libya, that has to be done," said analyst Lawrence Eagles of JP Morgan. "As always with OPEC the proof will be in the pudding. How closely will they stick to the new limit?"

"The whole organization has to be at 30 million so if someone goes up somebody else should come down. But it's like anything when you divide responsibility -- it often ends up falling through the cracks," said Webster of PFC.

Rising supply from Saudi Arabia and its Gulf Arab neighbors Kuwait and the United Arab Emirates has kept a leash on oil prices as Riyadh seeks to help nurture global growth by keeping fuel costs under control.

HAWKS WANT NO LESS THAN $100
OPEC's price hawks, all of whom already pump at full capacity, want to keep prices above $100.

"We think the present level is appropriate for producers and consumers," Algerian Oil Minister Youcef Yousfi said of prices.

The Gulf Arabs would prefer prices that don't hinder economic growth while meeting their budget and oil investment needs. The UAE said recently that $80-$100 was reasonable.

"Saudi Arabia is the central banker of the oil market and the decision that they will bring more oil to the market is definitely a good one," said Fatih Birol, chief economist at consumer body the International Energy Agency.

World oil inventories should now rise, boosted by Libyan oil output that hit 1 million bpd this week on the way back to pre-war output of 1.6 million.

OPEC's secretariat calculates that 30 million barrels a day from the group will meet demand in the first half of the year and build stocks by 650,000 bpd.

According to the U.S. Energy Information Administration that would lift inventories among industrialized OECD nations from 56 days of OECD demand now to 60 days by the middle of 2012.

OPEC next meets on June 14. Badri said OPEC would be ready by then to tackle the tricky issue of re-establishing individual quotas.

That could prove difficult. Saudi Arabia and others who have seen market share rise in the past two years are unlikely to not cede ground on quotas to those who have lost share and cannot pump more.