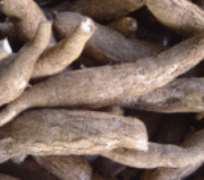 A research team led by the International Institute of Tropical Agriculture (IITA) has developed three new varieties of vitamin A cassava that could improve the livelihoods of millions of farmers in Africa and help put an end to malnutrition due to vitamin A deficiency in the continent.

The vitamin A cassava varieties named by the National Variety release Committee of Nigeria as UMUCASS 36, UMUCASS 37, and UMUCASS 38 are recognized as IITA genotypes TMS 01/1368, TMS 01/1412, and TMS 01/1371. They have high beta carotene (pro-vitamin A) and are suitable for food uses as gari, fufu, and high quality cassava flour.

The yellow root color of the vitamin A-rich varieties are products of over 20 years of breeding efforts for improved nutritional quality using traditional breeding methods involving hybridization and selection of cassava seedlings followed by clonal propagation of the selected desirable plants.

Drs. Peter Kulakow and Norbert Maroya, IITA Cassava Breeders, said, “The development of these varieties is a major breakthrough that will change the nutritional status of people living on cassava-based food.”

Known for its high carbohydrate content, cassava is the fourth largest staple after wheat, maize, and rice consumed in the developing countries, with over 200 million people in sub-Saharan Africa relying on the crop for over half of their daily food energy.

The biofortification of cassava with pro-vitamin A provides a cost-effective way of combating vitamin A deficiency in the region where millions are malnourished and many people live on less than $1 per day.

In Nigeria where the average consumption of cassava is 600 grams per capita per day, about 20% of pregnant women and about 30% of children under five suffer from vitamin A deficiency. Resultant health implications include low immunity and impaired vision, which often lead to blindness and even death.

Maroya says the release of this first set of vitamin A cassava varieties in Nigeria is “a victory for women and children.”

The project, funded by Harvestplus, was carried out by IITA with the Nigeria-based National Root Crops Research Institute (NRCRI), Umudike and with other local partners.

Dr. Chiedozie Egesi, NRCRI Cassava Breeder, says the development of the varieties marks a new dawn in Nigeria's cassava industry as it is the first set of 'nutritious cassava developed and released in Nigeria.'

Farmers who participated in the project loved the varieties for their high-yielding ability and resistance to major diseases and pests.

“Demand for these varieties has already started, but it will take some time before we have enough quantities to give out,” says Paul Ilona, the HarvestPlus Manager for Nigeria.

The yellow cassava is already being multiplied through stem cuttings. In 2013, when sufficient certified stems will be available, HarvestPlus and its partners will then distribute these to about 25,000 farming households initially. Farmers will be able to grow these new vitamin A varieties and feed them to their families. They can also multiply and share cuttings with others in their community, amplifying the nutritional benefits. After the mid-2014 harvest, more than 150,000 household members are expected to be eating vitamin A-rich cassava.

Other partners in this work include the International Center for Tropical Agriculture (CIAT) and the Brazilian Agricultural Research Corporation (Embrapa).