I disobeyed my dad to become an actor – Olu Jacobs 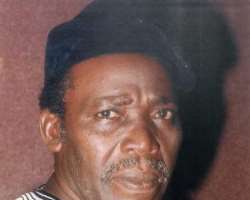 Fondly called Uncle Olu by his colleagues and teeming admirers,

Olu Jacobs, the Ogun state-born international veteran actor, has made his mark in Nigeria's movie industry. With over 40 years acting experience, Jacobs is seen as a bridge between the old and new breed of stars, a motivator to the upcoming acts. His charisma and manner of delivery of lines are legendary, drawing admiration from fans.
His infectious baritone and interpretation of roles are a director's delight.

Trained at The Royal Academy of Dramatic Arts, England, Jacobs remains one of Nigeria's creative gifts to the world, having worked with various repertoire theatres in Britain and starred in some international movies, including the latest version of John Millington Synge's classic, “The Playboy of the Western world” co-written and produced in 2007 by a Nigerian, Bisi Adigun and Roddy Doyle.

Last week, in Ikoyi, at a graduation ceremony of the pilot students of Lufodo Academy of Performing Arts, owned by the actor, and his wife, Joke Silva, also a multi-talented actress, HVP engaged him in this revealing interview. Read on…

That's Olufodo Academy of Performing Arts all about?

Olufodo Academy of Performing Arts have been existing informally for more than 15 years now. Informally because we were visiting privately owned schools propagating the values of theatre to the young ones. The Academy is from the stables of Olufodo Group. We are involved in training medium class executives of corporate organizations( Lofodo consulting) There are quite a lot of young men and women who studied Theatre Arts at the University.

But while studying, little or no attention aws paid to the need for television aspect which is the communication medium of today and of tomorrow. We only concentrating on theatre, which does not hold any future for us as a people. When I was in England, I was involved in TIE theatre in Education. I went from school to school to entertain as well as helped through drama to explain things and make them easier for children to understand and follow up.

And when I returned to the country, I saw the need for me to introduce the same in our school system in Nigeria. When I did, the children in private schools liked it.The schools set a certain time aside which is not the most satisfying way of doing it. Some parents kicked against it but the pupils like the drama class that we are taken them on.

Memorable events of your life?

It was when I asked my wife to marry me. I took her to a restaurant for a special dish about 9 pm. The food was served in a clay pot that was completely sealed and cooked by only heat. I ordered for it, and thereafter went on my kneel to ask her to marry me. This was about 24 years ago.

What was her respond?

Her greatest asset you value in her?

My family. That woman, or rather that girl should I say, is a loving, caring and dedicated wife. She's very caring and motherly. What she says goes as far as I'm concern.

My regret is that I didn't marry on time. I didn't meet my wife at the time I supposed to have met her. I met my wife while directing the premiere of Wole Soyinka's “Jero's Metamorphosis' to commemorate the 21st independence anniversary. She was one of the casts.

You had the believe that you wasted your time with the women that crossed your path?

I didn't want to get married initially. I couldn't have gotten married because I was in the England and never wanted to marry a white woman. I was not going to marry a non-Nigerian. I didn't come home for a while and it meant that I didn't have any serious girl friend.

What's the experience that helped shape your future?

Not so much. But I remember that when I was in primary four, I fell in love with my class teacher. One day, she came to introduce her fiancee to my parents and when I saw her, I was not happy. As a result, she never saw me in her class for another session. Yes, I would leave home for school, and after the morning devotion, while other pupils were retiring to their classes, I would disappear to God knows where, and never to be seen again. I was brought up in an Anglican faith, and was a member of the choir.

Even at my tender age, I loved fasting but it was my parents who calmed me down. I remember also that in those days, the church used to organize an annual programme where children of my age, mainly girls, danced and staged plays. Fascinated by this act, I told my mother one day that I could dance, and my mother relayed the message to my father.

When my father finally agreed, he came to the church to announce that his son was going to join the female dancers. I was the only male dancer in their mix.

But to their greatest surprise, I did marvelously well and everybody applauded me. All those things helped to prepare me for what I'm doing today. Then, when I saw movies, I used to imagine myself been part of it. It was no surprise that when late Hubert Ogunde came to KNAO, I was actually born in Kano. He came to mount a performance in Kano and it was the practice then, when artistes arrived a particular city, they stage a carnival in the city to announce their presence.

I came across their leaflets and took them home, showing them to my parents. They used the opportunity to give me extra home works to do. But when I was through with my home works, my parents had no option than to allow me to go and watch the performance.

It was an experience I will never forget. And I think it helped to tilt everything for me. By the time we got to the concert venue, everywhere was filled with spectators. Somehow, we were able to secure a little space there. And before we knew it, the light went off, and there was light music, dance, what Ogunde used to call “Opening Groves'.

Even at that tender age, I was able to connect to the performance. When the dancers and Hubert Ogunde mounted the stage, I said to myself, 'this is what I'm going to do for a living whenever I grow up'. So, when I made my intention known to my parents that I was going to travel to England, my father objected to it. He had to destroy the passport photograph I gave to him.

Yet, I was not deterred as I went on to obtain another application form and passport photograph. I booked for my visa interview and got my visa and was ready to leave for England. I was the only child of my father who had the courage to sit with him all the time. But when I left for England, I did not tell my father. He didn't know because he wouldn't have allowed me to travel. So, when I got to London, I wrote a letter to him through a friend who was coming back to Nigeria.

My father was a piper. So, I bought him some tobacco and sent it along with the letter. In that letter, I apologized to him for disobeying his instructions and also, I made him understand that I had gone to England to do what I wanted to do in life. After reading the letter, his attention was drawn to the fact that I sent him tobacco. He smiled and took the tobacco, filled his pipe and started smoking.

When he was through, he told my mother that they had no choice now than to keep in touch with me and to pray for me. Unfortunately, I never met him alive again.

How is it being in the same profession with your wife?

We are only doing our jobs, and we are coping with its challenges. After all, we are not the only husband and wife who belong to the same profession. We have in the banking industry and other professions. Also, we have Nobert Young and Gloria Anozie-Young and so many of other couples.

The point is that we do have helpers who take care of our home when we are on location. Most often, my wife is on location, while I'm also always on the road. So, we are busy people.

There are lots of broken marriages in Nollywood. And it was rumoured some time ago that there was a crack in your own marriage. Why is this so?

You have seen us. That's our baby(pointing at a little girl playing around). Because we are always in the eyes of the public, what we do become a public thing. You see, the public did not ask us to show our faces on screen. We show our faces.

Sometimes, we do forget ourselves that we no longer belong to ourselves. We are owned by the public, and as a result of that, we have to be careful of what we do outside. Sometimes, we are careless concerning some of the things we do, and when we show that carelessness, it's overblown out of proportion. As for my own marriage, I thank God, like I said, it's my 24 years in marriage. I married lately. Once in a while, we do have our arguments as human beings.

That's why I allowed her to use Joke Silva as an actress, and she's Mrs. Joke Jacobs, my wife. She also desires to have her own pride as a woman. I'm not talking about her family now. I'm talking about herself. When she's on the same set with me, she's Joke Silva, and we are next to each other.

For me, there's nothing wrong with that. But for her, when people were attacking her in the late 80s, and early 90s, it used to upset her. She's an individual, she deserves to have her own personality to feel fulfilled, while the relationship I have with her as a wife will be stronger. I thank God we don't have problem whatsoever.

Your voice remains your asset. Do you work on it?

My voice is my voice, and will always be my voice. I always work on my voice. All my students always work on their voices. That's the vehicle you will use in conveying your meaning; that's the power your as an artiste, apart from the way you look and your talent.