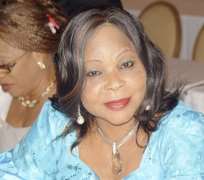 Nwaogu chairs the Senate Committee on Gas. She was first elected to the Senate in 2003.

In a unanimous judgment delivered by Justice Zainab Bulkachuwa, and made available to THEWILL, the court held that pursuant to the delineation of Senatorial Districts in Abia State of Nigeria by the 1st defendant (the Independent National Electoral Commission, INEC) Osisioma Ngwa Local Government Area of Abia State of Nigeria, does not fall within the Abia Central District.

Justice Zainab further held that “the 3rd Defendant (Senator Nwaogu) is ineligible to aspire to be sponsored by the 2nd defendant (Peoples Democratic Party, PDP) to contest the 2011 general elections to represent the Abia Central Senatorial district.

“The court therefore declares as unconstitutional, null and void and of no legal effect whatsoever the nomination of the 3rd Defendant by the 2nd Defendant to run for and/or contest for the post of a Senator representing the Abia Central Senatorial District in the 2011 general elections to be conducted by the 1st Defendant, based on false information/declarations on oath submitted to the 2nd Defendant.”

A member of the PDP and aspirant for the seat, Honourable Emeka Atuma had challenged the emergence of Nwaogu as the PDP’s candidate for the senatorial district praying the court the disqualify her on the premise that is not from the district.

The Appeal Court however refused to grant the plaintiff’s fourth prayer seeking to be declared winner of the Senatorial primary held on Sunday, January 8, 2011 at the Umuahia Township Stadium on the grounds that he did not tender any documentation to show that he came second in the primary.