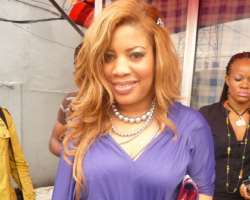 Taking time out of her busy schedule in the bustling city of Lagos, Glo Ambassador and sexy screen siren, Mona Lisa Chinda jetted out to
the Queen's own country (England)last week to attend the 2009 edition of the Afro Hollywood Award. The actress was nominated along with several other actresses for the Award for Best Actress in an English movie, and she won amidst some stiff competition. Also present at the occasion was veteran actor, Justus Esiri, Mercy Johnson etc.

The Afro Hollywood Award is a yearly event organised by Mike Abiola and it seeks to reward deserving actors and actresses for their contribution to the development of film in Nigeria. Speaking with the star on the significance of the Award who has since returned to the country she said, 'I couldnt be more happier (to win this Award). This has been a particularly tough year for me but God has been faithful.

He has seen me through and I am most grateful'. So whats new for the bubbling actress? "Well, I have acted in a couple of movies recently.... one of which will be premiering at SilverBird Cinema at the end of the month. Its called 'Nollywood Hustler' and is a comedy. I really enjoyed showing that side of me. So what else is new? 'Well, I have a column in one of nigerian newspapers on Saturday where I write about various issues. You should check it out sometime'.

Hmm... maybe I will. Mona Lisa... writing a column? That'll be interesting.