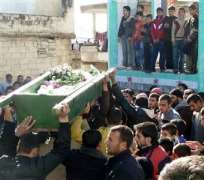 More than 5,000 people have been killed in nine months of unrest in Syria, the U.N. human rights chief said, as an insurgency began to overshadow what had initially been street protests against President Bashar al-Assad's 11-year rule.

Navi Pillay reported the death toll to the U.N. Security Council as 1,000 higher than the previous toll just 10 days ago. It includes civilians, army defectors and those executed for refusing to shoot civilians, but not soldiers or security personnel killed by opposition forces, she said.

The Syrian government has said more than 1,100 members of the army, police and security services have been killed.

Syria's actions could constitute crimes against humanity, said Pillay, issuing a fresh call for the council to refer the situation to the International Criminal Court.

"It was the most horrifying briefing that we've had in the Security Council over the last two years," British Ambassador Mark Lyall Grant said after the session, which was arranged despite opposition from Russia, China and Brazil.

The sharp rise in the death toll is bound to lend weight to those arguing for increased international intervention to stop the bloodshed in Syria.

Assad, 46, whose minority Alawite family has held power over majority Sunni Muslim Syria for four decades, faces the most serious challenge to his rule from the turmoil which erupted in the southern city of Deraa on March 18.

A violent security crackdown failed to halt the unrest -- inspired by popular uprisings in Tunisia, Egypt, Yemen and Libya -- which turned bloodier in the last few months as defecting soldiers join armed civilians in fighting back in some areas.

DAWN BLOODSHED
In the latest violence around dawn on Tuesday, security forces shot dead 11 people and wounded 26 others in Idlib, a northern protest hotbed, the British-based Syrian Observatory for Human Rights said.

At the flashpoint central province of Homs, an explosion set a gas pipeline on fire on Monday, the second reported pipeline blast in the area in a week. "The fire lit the night sky," said a resident who gave his name as Abu Khalaf.

State news agency SANA said the pipeline, near the town of Rastan, supplied gas to an electricity power plant.

SANA also said border guards foiled an attempt by "an armed terrorist group" to cross into Syria from Turkey on Monday, the second such reported incident in a week. It said they shot dead two of the 15-strong group.

The Observatory said a pro-Assad armed group was holding 17 workers seized in Homs on Saturday.

Despite the spiraling violence, Syrian authorities held local elections on Monday as part of what they say is a reform process, but Assad's critics described the voting as irrelevant.

Monday was also the second day of the opposition's "Strike for Dignity," but its success was hard to gauge in some cities where violence has kept many residents in their homes.

Though the strike has found support in protest strongholds around the country, it has not taken hold in central parts of the capital Damascus or the business hub of Aleppo.

Syria has barred most independent journalists, making it hard to assess conflicting accounts of events there.

"SYSTEMATIC ATTACK"
In New York, Western envoys on the Security Council said Pillay's briefing on Monday was horrifying and termed it scandalous that the council, paralyzed by opposition from Russia and China, had taken little action on Syria.

"Independent, credible and corroborated accounts demonstrate that these abuses have taken place as part of a widespread and systematic attack on civilians," Pillay said, according to briefing notes seen by Reuters.

French Ambassador Gerard Araud said, "It is scandalous that the council, because of opposition from some members and the indifference of others ... has not been able to act to exert pressure on the Syrian authorities."

More than 14,000 people were reportedly in detention, at least 12,400 had sought refuge in neighboring countries and tens of thousands had been internally displaced, Pillay said, also citing "alarming reports" of moves against the city of Homs.

Russian Ambassador Vitaly Churkin said he too was troubled by Pillay's report, but he said outside intervention could lead to civil war and a far higher death toll.

He repeated accusations that Western countries had gone into "regime-change mode," adding, "The tragedy is that if things were allowed to degenerate and to go in the direction of further provocation, of fanning further confrontation, then maybe (there would be) hundreds of thousands dead."

Russia joined China to block Western efforts to pass a resolution against Syria in the U.N. Security Council.

Syrian Ambassador Bashar Ja'afari said Pillay should never have appeared before the council for a session that was part of a "huge conspiracy concocted against Syria from the beginning."

POLLS -- REFORM OR SHAM?
Assad's government portrays the municipal polls as part of a process leading to a parliamentary election next year and constitutional reform. But critics say local elections have little meaning in a country where power is highly centralized.

Prime Minister Adel Safar urged voters to "stand together to save our country from the conspiracies against us" and SANA said Syrians had flocked to the polls in 9,849 voting centers.

Assad has said reforms cannot be rushed in Baathist-ruled Syria, which is a close ally of Iran, a key player in nearby Lebanon and supporter of militant anti-Israel groups.

Some of his opponents see civil disobedience such as the strike action as preferable to armed confrontation, with the risk of civil war looming.

"The cost will be more human lives I am afraid," said Rima Fleihan, a member of the foreign-based opposition Syrian National Council.

"But it is less costly than an armed uprising and the regime dragging the country into a Libya-type scenario."