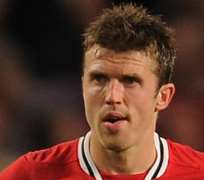 Michael Carrick claims Manchester United are right where they want to be - in a better position than last season and ready to mount a title charge.

The Red Devils secured a record-breaking 19th top-flight crown last season, with Sir Alex Ferguson's side once again coming out on top over the course of a gruelling campaign.

They have no intention of relinquishing their grip on the crown, with continued success demanded at Old Trafford.

United are currently trailing arch-rivals Manchester City by two points, but they are well-placed to stage a surge for the summit.

They are five points better off after 15 games than they were at the same stage in 2010/11, and Carrick believes the Red Devils are in prime position to launch a New Year title assault.

Standard
"City have set the standard and not dropped many points but there's a cluster of clubs behind them which we're heading up, so we're quite happy with the way things have gone," said the England international.

"Of course we'd prefer to be on top but we're actually in a better position than last season and, hopefully, we'll be even closer to them come the end of the year."

Carrick is, however, aware that United are not the only side looking to overhaul City at the Premier League summit.

He added: "We've seen a lot of the big teams move up the table - Tottenham have been on a great run, Arsenal have come on strong and Liverpool are picking up points too.

"It may stay like that for a bit - even going into February or March you can have three or four involved and then it ends up being only two.

"The important thing for us at the moment is making sure we stick close to those teams and, hopefully, get that top spot as soon as we can."

Rhythm
Carrick is keen to play his part in United's quest to land a 20th title and believes a recent run in the side has helped him to recapture his best form.

He said: "It's been nice to be playing two or three games a week and getting into a rhythm and I've been enjoying my football.

"Everyone wants to be playing all the time but we all understand the situation and know the boss will rotate things.

"You've just got to keep producing the kind of form that will keep you in the team."