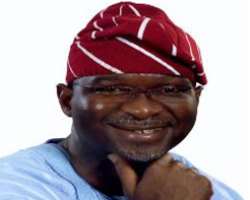 Huhuonline.com understands that the head of the Lagos State Inland Revenue Service (LIRS), Tunde Fowler, is on the hot seat as sources close to the state government say the state governor, Babatunde Fashola, may consider him for sack.

His sin is that he turned the wedding ceremony of his daughter, Funke, to Abiodun Kuku, son of Ogbeni Oja of Ijebuland and Director of the EKO Hospitals, Chief Bayo Kuku into a carnival with his alleged sponsorship of the multi-million-naira event.

The anger, according to the sources, stem from the fact that the top civil servant exposed the state government to ridicule at a critical time when the government is doing everything to cut cost and effectively manage the scarce resources of the State. It was learnt that the Governor in conjunction with top officials of the state, have begun a review into the issue, an action which may cost the LIRS boss his job.

Governor Fashola had since the beginning of the payment of minimum wage to workers of the State, emphasised the need to reduce government spending and avoid wastage. He also advised against any act that would paint the government in bad light.

The wedding ceremony which held in two parts and in two different countries of Lagos and Dubai, took place between October 22 and November 19,  2011. The traditional wedding which had mighty and prominent Nigerians including business mogul, Aliko Dangote, governors and National Leader of the Action Congress of Nigeria (ACN), Bola Tinubu, in attendance, held at the Tafawa Balewa Square (TBS), Lagos, while the white wedding held in Dubai on November 19 with all the invited guests' trip expenses allegedly catered for by Fowler.

The two events were strictly by invitation and to make the attendance for the traditional wedding effective, the invite admitting guests into the TBS venue was designed like ticket used by music promoters in form of a wrist band.

Event managers like Balmoral, Blue World and Bonmix were on ground to ensure that the event was successful and met the target of the organisers.

The event however drew the ire of both staff of the state government and even residents of the State is said to be causing ripples among top staff of the state who are asking how the Permanent Secretary of the LIRS, an organisation which was set up to help generate revenue for the State, could have gotten so much wealthy as to organise such a bash.

Unconfirmed reports say he was queried by the Governor, as Fashola is said to have received several complaints and negative comments from the members of the public as a result of the wedding ceremony.

"Fashola is not happy with the man for trying to bring down the good image of the government. In fact, that man is a civil servant, so one wonders how he got so much money to squander," one of our sources stated.

The source also said the LIRS boss is meeting with prominent residents of the State to help mediate in the sour relationship between him and his boss. "He is aware that the governor may be weighing the option of relieving him of his job, probably not because of this particular issue but after due consultation with those he respects. He may then peg Fowler's removal on an unethical practice if they find any, no matter how small, against him.

"The only person who can save him now is former Governor Tinubu, but I can tell you that once Governor Fashola takes a decision to get him fired, Tinubu would hardly intervene because the 'Governor Emeritus' hates anything that would soil his image or that of his close associates," our source said.