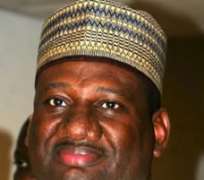 Yusuf Suleiman
As the plot to deny Governor Aliyu Magatakarda Wamakko of Sokoto State a fresh ticket ahead of the governorship election scheduled by the Independent National Electoral Commission, (INEC) for March 10, 2012, thickens the Peoples Democratic Party, (PDP) chieftains from the seat of the caliphate  are not  bemused  over the turn  of events in the state chapter of the party over Governor Wamakko  ambition for fresh ticket.

Before the PDP National Working Committee released its guidelines for the sales of the party expression of interest and nomination forms for its primary slated for December 17, 2011, federal lawmakers from the state, instigated by the embattled governor, had taken a pre-emptive move.

In what they claimed to be a courtesy visit on the national leadership of the party, the senators and members of the House of Representatives on the PDP platform from Sokoto State, led by Senator Umaru Dahiru, had told the acting national chairman of the party, Alhaji Kawu Baraje in his office that Governor Wamakko was the consensus candidate for the March 2012 governorship election.

Addressing journalists, Senator Umaru Dahiru declared that the candidature of Governor Wammako was endorsed, because of his immense contributions to the development of the state.

''At the meeting held on October 17, 2011, we the caucus of the Sokoto State National Assembly members hereby resolved to endorse the candidature of Alhaji Aliyu Magatarda Wammako as the gubernatorial candidate of our great party, the Peoples' Democratic Party for the forthcoming 2012 election.

The endorsement of Alhaji Wammako was based on the following reasons: purposeful leadership, maintenance of peace and tranquility in the state, meaningful development of the state and a stabilizing force of the PDP in the state.''

The Speaker of the House of Representatives, Honourable Aminu Tambuwal was not part of the delegation to Wadata Plaza but signed the resolution endorsing Governor Wamakko for automatic ticket.

In a tacit endorsement of their position, acting national chairman of the party, Alhaji Kawu Baraje attested to the leadership qualities of the incumbent governor.

He told the Sokoto federal lawmakers that while other members of the party could pick the nomination forms, Governor Wammako remains a credible candidate for the party ticket.

''Our candidate is acceptable and popular and he is a performing governor. It is a unique thing that after four years, the same governor is popular as you have demonstrated here today.

We urge you to continue to work together, towards the success of the party. We feel encouraged and we want you to carry the message to Governor Wammako; the party is with him and we will all present him for the election. That doesn't mean that other persons cannot buy forms; our doors are open. But our candidate is performing and credible and you have said it yourself.''

But after the party announcement of the commencement of sales of form ahead of the party governorship primary, Baraje was to discover that opposition to Wamakko ambition for fresh ticket was real.

Party chieftains from Sokoto State stormed the party national secretariat, last month to inundate the party leadership of the sins of Governor Wamakko In a petition dated 16th November, 2011 and signed by eight stalwarts of the party, from Sokoto state including the zonal chairman of the party, Alhaji Umaru Sifawa and submitted to the PDP National Organizing Secretary, Uche Secondus, they detailed the alleged sins of Governor Wamakko.

The petitioners alleged that the Governor worked for the emergence of Honourable Aminu Tambuwal for the position of Speaker of House of Representatives, as against the party anointed candidate, Honourable Mulikat Adeola.

'In order to create acrimony within the party, the incumbent Governor of Sokoto State, Aliyu Magatakarda Wamakko deliberately went against zoning principle of the party by supporting financially the candidature of the present Speaker, Honourable Aminu Waziri Tambuwal.

This was in total disregard to the principle of zoning as enshrined in the constitution of our great party. An action that became a great embarrassment to our great party, because the President, the entire leadership of party were publicly and injuriously humiliated.

In an apparent move to compensate Wamakko, the Speaker Waziri Tambuwal went ahead to canvass for automatic ticket for his sponsor in total disregard to the constitution that makes party primary as a major requirement of our electoral laws, notwithstanding the feelings and sensibilities of members of the party in Sokoto State.''

The Governor was also alleged to have compelled the delegates to the national convention of the party to vote for former vice-president and presidential aspirant, Alhaji Atiku Abubakar, as against President Goodluck Jonathan who ultimately emerged.

They further alleged that Governor Wammako was instrumental to the victory of the All Nigeria Peoples' Party, [ANPP] governorship candidate in Zamfara state at the last April poll, Alhaji Abubakar Yari.  Governor Yari defeated the then incumbent governor and PDP candidate, Alhaji Mahmud Shinkafi.

Making a veiled reference to the travails of Bayelsa State Governor,  Timipre Sylva who was prevented from contesting for the party ticket, the petitioners called on the PDP NWC to  apply the treatment given to certain prominent leaders of the party recently to the Sokoto state governor.

'We find comfort and precedence in the recent action taken by the national executive of our great party in disqualifying prominent PDP candidates from contesting various elections, including incumbent governors on account of similar and even less infringements against the party constitution, values and interests. We only ask you to use your good offices to do same in Sokoto state to save our great party from disgrace in the forthcoming gubernatorial contest. Disqualify Aliyu Magatakarda Wamakko from contesting for any political office at any level, including the forthcoming primaries for gubernatorial elections [in line with our great party constitution].''

But addressing journalists last Thursday in Abuja after submitting his nomination form, Governor Wamakko denied the allegation of anti-party activities leveled against him.

'I hope you will look at the record and judge by yourself. We are the only State in Nigeria that is 100 per cent for PDP. In Sokoto, no single court case after the elections because we believe in peace, transparency and good governance''.

Senator Gada: compensation for good boy?
The urbane former federal lawmaker is a member of the National Interest Group. Other visible members of the group are Senator Smart Adeyemi, Chairman Senate Committee on FCT and the present Minister of the Federal Capital Territory, Senator Bala Mohammed. They were favourably disposed to the emergence of President Jonathan as acting president in the uncertain days when he was at the mercy of the cabal within the presidency and contributed to his emergence as PDP presidential candidate and victory at the presidential elections.

Abubakar Gada was however not lucky as Governor Wamakko allegedly worked against his emergence as the party candidate for Sokoto east senatorial zone.Before his  declaration for the governorship ticket, he has been embroiled in litigation over  the senatorial ticket which he lost.

Speaking in Abuja while playing host to party leaders and market women who came to appeal to him to contest for the party governorship ticket, Gada had painted an unsavoury picture of the rot in Sokoto under Governor Wamakko.  ''Sokoto is a pride to all and sundry, a place where education, peace, development and religion originated and spread to the rest of West Africa. But today, it is compromised, bastardised and destroyed. We share the feelings of the women who came to Abuja to express their feelings and appeal to our group to challenge the monster in Sokoto and have a change.

I cannot refuse their appeal; it is a sacrifice we must be prepared to do. I have accepted to contest this governorship election and by Allah's will to remove the incumbent governor with all the atrocities  perpetrated  by him''.

The aspirant also appealed to serving members of the National Assembly from the state who had endorsed Governor Wamakko for a fresh mandate to have a rethink and align with the collective aspirations of the Sokoto electorate.

'I appeal to my colleagues in the National Assembly, the Sokoto people want them to come on board and fear Allah so that together we can change the present situation. Let them be part of change so that history will remember them, positively.''

Senator Gada is perceived in certain quarter as President Jonathan anointed candidate for the PDP governorship ticket in the state.

Enter the Sokoto Prince The declaration of interest by the immediate past Honourable Minister of Sports, Yusuf Suleiman has left party chieftains confounded over who is really the anointed candidate of President Jonathan.

Speaking with newsmen last Wednesday at the party national secretariat, Honourable Suleiman denied being the anointed candidate of President Jonathan, as he told journalists that his decisions to contest was his personal decision.

' I am still a serving cabinet member of this administration and to take such a step requires not only my personal judgment and conviction but everybody that is involved in this process.'

But Daily Sun findings revealed that some of the party stalwarts and certain influential individuals in the state opposed to Wamakko return may have dumped Senator Gada, knowing fully well that he would be a hard sell to the caliphate.

'Gada is too independent minded to be acceptable to the caliphate.

Yusuff is from the royal house; he is one of them-- an establishment man, but very popular with the people. That fact isn't lost on the presidency.''

The source further argued that it was not true that Jonathan was pushing Senator Gada for the party ticket, as compensation and accused the Gada camp of dropping the President's name.

'Yes, he worked for Jonathan, but have you asked yourself why he wasn't compensated? If Jonathan really loves Gada, why didn't he give him a ministerial position like Bala Mohammed who was returned to FCT?''

Daily Sun source further revealed that Senator Gada may eventually defect to the All Nigerian Peoples' Party, [ANPP] to pursue his governorship ambition.

'It was to foster this ambition and prepare an alternative platform for Gada that former Sokoto State governor, Alhaji Atahiru Bafarawa dumped the ACN recently and returned  to the ANPP.''