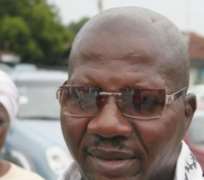 Veteran Yoruba actor,Babatunde Omidina,otherwise known as Baba Suwe since after his ordeal with the Nigerian Drugs Law Enforcement Agency,(NDLEA) we gathered has become so big that he doesn't accept any movie roles nor MC jobs.

The actor who has just been exonerated by the court of law and awarded the sum of N25 million,source revealed has been rejecting all offers coming to him now.With the reason that he is not ready to do any thing at the moment.Who knows,maybe he needs rest or that he is already living on money he is about getting.

In a related news,we gathered that the comic act is in a fresh romance with actress Sherifat Ilerika.

According to source,they kick started the ir relationship prior to the death of Omdina's late wife, Monsurat ( more popular with the stage name Moladun)

Insiders revealed before his arrest, Sherifat was a regular caller at Omidina's office- where he maintained a room.

They were several spotted at SP Hotel, Ebutte Metta- where the popular actor usually lodged.

On November 04 2011, when Baba Suwe was granted bail- Sherifat was with him all through the day and left the court with him.

Sources claim she cares for him like a 'dutiful wife' ever since.

Insiders claimed Sherifat is married- but her marriage is troubled and considered in some quarters 'over'.