SECURITY IN NIGERIA: A SOCI0-POLITICAL HARMATTAN 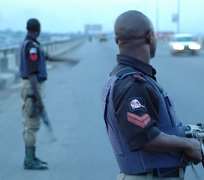 The Harmattan is a dry and dusty West African trade wind. It blows south from the Sahara into the Gulf of Guinea between the end of November and the middle of March.

In some countries in West Africa, the heavy amount of dust in the air severely limits visibility and blocks the sun for several days, comparable to a heavy fog. The effect caused by the dust and sand stirred by these winds is known as the Harmattan haze.

The interaction of the Harmattan with monsoon winds can cause tornadoes. Humidity drops to as low as 15 percent and can result in spontaneous nosebleeds for some.

Nigerien folk wisdom claims that men and animals become increasingly irritable when this wind has been blowing persistently. In Nigeria it is Apollo, an eye infection caused by the dust.

In the present socio-political and economic climate, in few lines I have chosen to ask, is it not safe to conclude that beyond the November-March timeline we are already victims of a self-induced harmattan, is there any form of change or we are temporarily sentenced to the current "fresh air"?

Can it get worse, will it get better, the horizon is bleak but those that are saddled with our weather report say there is no alarm for the cause.

Nigerians are living on the edge, the harsh realities are almost worse than the harmattan wind.

The harmattan weather is leaving our education system covered in dust, with billions of Naira in capital flight going to Ghanaian schools.

There is no difference between a PhD sitting president as the tug-of-war with ASUU continues and Nigerians are blinded from education by the dust of mediocrity. Many Nigerians have to be content with "I pass my neighbour" private schools.

In this harmattan climate, not only do our leaders treat themselves of migraine caused by thinking of the next fraud and stomach aches from eating our money, now it is also fashionable for them to die there.

While millions of Nigerians are unprotected, a state is for a few day turned to a police state because the right thing simply will not be done and here I draw a connect between the harmattan and the current security status in Nigeria.

In this harmattan season, it is known fact that the security of the entire nation has been greatly compromised by the activities of certain individuals, as robberies on a James Bond in the South West, kidnapping on a Mexican wave in the South East and rape elsewhere and Boko Haram holding sway up country.

It is common knowledge that the president is not even protected at all and you can get at him at any time in or out of his residence. Sadly his only residence these days are outside the country or in Aso Rock and its vicinities.

In this season the continued modus operandi of government by settlement which had long plagued us as a people is on the rise with all sorts of characters serving as consultants on security.

Beyond Boko Haram and armed robberies the problem is that the system is in dire need of an overhaul...

The government and its agents are dust blind, you might say. Outdated equipments are bought and being installed in Abuja, CCTV and bomb detection equipment that are technology decades old.

From Sokoto to Lagos, Ogun to Yobe, Abia to Kaduna states. There is so much fear and apprehension among Nigerians that the government can no longer protect its citizens?

Only recently former FCT Minister El-Rufai had squabbles with security operatives for figures he released on security spending...today I ask what are the costs expended so far on security equipment and the so called security consultants, and training?

The president and his team are touring the world in the name of foreign investments, corruption on the rise, the nation is facing a recess, and again we see the fuel queues.

There are no real interests to control the activities of Boko Haram either by decisive action, negotiation or dialogue because of vested interests. As the president continues to say in various forums, the Boko Harm days are few or they will fade away. The same militants that claim to have been reformed issue threats at every slightest opportune time.

Nigerians are highly intelligent and resourceful people and can put an immediate end to all of these happenings when their own status is on the line and their livelihood is at stake or threatened.

Painfully we are not there; we have not gotten to that point yet but may soon reach the point of no return.

Certain people are benefiting financially from the current security situation in the country, from inflated security contracts...We now have conflict entrepreneurs within an already terrible system, thus compounding an already dust inflicted situation.

What is the cost and worth of a Nigerian life, at this rate the harmattan dust may as well cause us all to nosebleed to death or go blind, is we do not have a full tornado.

Nigeria is a tinderbox beyond imagination. Decades old hatreds and fears are closer to the surface here than even in the Balkans.

Real nation building is not in the cards. Nigerians are angry, divided, fed up with abuse, as social injustice smells everywhere.

One minor offshoot of the decision making and policy formulation we are seeing is the utter and total destruction of Nigeria’s economic and commercial viability despite all the wishful thinking of foreign investment, job creation. You can feel the harmattan haze...

While government continues to elude herself, we are being erased from the maps of boardrooms across the world as a potential place of business, of development, of wealth creation, from Beijing to Zurich and places beyond.

Our current leaders with the exception of few have shown themselves as a bunch of political mishaps, overcoming corruption more of an illusion than reality.

To reverse the harmattan wind there is an urgent need to deliver on promises of electrical power, police reform, refinancing debt, education, health and so many things.

This opinion didn’t take genius, hardly. I had seen it all, were it taught, which it is not, we would call it history. Time will tell...