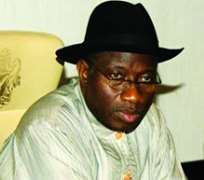 President Goodluck Jonathan has relieved the Minister of Sports, Alhaji Yusuf Suleiman of his post with immediate effect. This is to afford him the opportunity to focus fully on the pursuit of his declared political ambition.

In a statement by the Special Adviser to the President on Media and Publicity, Dr. Reuben Abati, President Jonathan thanked Alhaji Suleiman for his services to the nation and wished him success in his future endeavours.

Reacting to the Presidency's position, an aide to the former minister, said that Suleiman resigned his position when he joined the governorship race in Sokoto. He said that his principal's resignation letter was acknowledged and accepted by the Federal Government in a letter written by Secretary to the Government of the Federation, Senator Anyim Pius Anyim.

'I am to convey Mr. President's appreciation for the services you rendered to the nation during your tenure as the honourable minister of sports and chairman and the Sports Commission. I wish you God's guidance and best of luck in your future endeavours.'

Suleiman had earlier sent in his resignation letter on December 2, 2011, intimating Jonathan of his governorship ambition and therefore said: 'It's therefore with heavy heart and a deep sense of responsibility that I seek Your Excellency's kind permission and approval to formally disengage and resign from the federal Executive Council and as a minister of the government of the federation with effect from today, Friday, 2nd December 2011.'

In another deveopment, Suleiman has said he was not going to join issues with Sokoto State Governor Aliyu Magatakarda Wamakko in his struggle to get the Peoples Democratic Party (PDP) governorship ticket for March 2012 election.

Speaking at the PDP national secretariat, after submitting his nomination forms, the minister expressed readiness to move Sokoto State to a higher level with the support of all the stakeholders in the state.