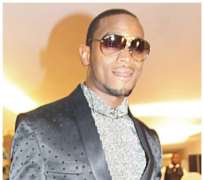 After spearheading a six- city tour of musical extravaganza in the MTN Funlink Campus Concert series, Nigerian multi-talented pop sensation, D'banj has commended MTN Nigeria for providing him the platform to interact with Nigerian youths across the country in an atmosphere of fun and excitement.

The multiple-award winning artiste, last weekend, at the Blue Roof Hall of LTV grounds, venue of the show, showered praises on the telecommunications company, while performing at the final phase of the concert which commenced in Sokoto on the 3rd of November.

*Dbanj
According to D'Banj who just signed a multi-million dollar deal with American international music icon, Kanye West, going  on a music tour with MTN is a great privilege.

'It's been a memorable experience for us since the tour commenced. It's a great opportunity for me and the entire 'Mo' Hits' crew because we have always wanted to be on the road to meet and interact with our fans across Nigeria,' he said.

D'banj further confessed that he was particularly excited because the Funlink Concert took place at a time when he started promoting his new album.

The concert which also held in Abeokuta last Thursday before the final show in Lagos, witnessed a mass turnout of fun-seeking youths and the young-at-heart, who trooped into the venue of the event as early as 5:00pm to be part of the musical explosion billed to entertain and excite young Nigerians with the sensational music crew of 'Mo'Hits' and past winners of MTN Project Fame West Africa.

Coming after some gripping performances from MTN Project Fame Seasons  1 and 2 winners, Inyanya  Mbuk and Mike Anyasodo and rib-cracking jokes from star-comedian, Seyi Law; the 'Mo' Hits' Crew did not let the appreciating audience down as they stormed the stage one after the other to churn out hit after hit from their array of high-selling albums.

D'Prince and Dr Sid were the first to hit the stage with scintillating performances before being joined by Wande Coal who thrilled the cheering crowd with several hit tracks from his 'Mushin 2 Mo-Hits' album, to the delight of the cheering crowd.

The show reached a crescendo with the high profile appearance by the sensational D'banj.

In what was clearly a night of thrills, MTN Funlink, the telecom company's segment for the young and trendy, surpassed the expectations of Lagos music lovers with an overwhelming musical experience and other fun activities including singing competition, dancing competition and comedy contest, providing opportunities for participants to walk away with exciting prizes.

While presenting prizes to the winners, Brand Manager, Youth and Trendy Segment, MTN Nigeria, Mr Kelvin Orifa, said MTN Funlink is a special package designed basically for the youth and others who want to identify with fun, friendship and trends.

The entire show which was built around the Mo'Hits crew made an unassuming statement about MTN's commitment to -connecting the passion of Nigerian youth through engagement and experiential platforms.

This also goes as far as the promotion of Nigerian artistes and development of the Nigerian music industry.