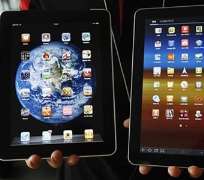 The biggest legal battle for the technology industry is playing out in a federal court in Silicon Valley, where Apple is trying to stop Samsung from selling Galaxy phones and tablets in the United States.

In the lawsuit, filed in April, Apple accuses Samsung of "slavishly" ripping off its designs for the iPad and iPhone. Although there is worldwide interest in the case, the proceedings have largely been shrouded behind a veil of secrecy: most of the court papers are sealed, meaning they can't be viewed by the public.

Filing documents under seal has become almost standard procedure in many intellectual-property cases -- like Apple versus Samsung -- as companies claim their trade secrets and confidential information could come out during litigation. Judges have surprisingly wide latitude in deciding what should be kept under wraps and what shouldn't.

Some courts, like the U.S. District Court for the Northern District of California, where the case is being heard, have rules requiring that judges specifically sign off on every request to seal a document -- but these rules set no deadline.

In the Apple/Samsung case, some secrecy requests have languished for months while investors, academics and tech bloggers struggled to piece together whatever bits of information were available.

In every instance that she did issue a ruling on a sealing motion, U.S. District Judge Lucy Koh in San Jose granted the request. Just this week she approved six more motions to seal. Samsung's most crucial legal brief became available after months of delay -- and then only in redacted form.

The stakes here are high: Samsung had 23.8 percent of the global smartphone market in the third quarter, nine points higher than Apple. Yet Samsung's holiday sales could be jeopardized if Koh, who is expected to rule any day, grants Apple's motion to halt Samsung's sales of Galaxy.

Lack of transparency in the courts troubles many observers.

"For the judicial system as a whole, we want transparency so the public can have confidence in the judicial decision-making process," said Bernard Chao, a professor at the University of Denver's Sturm College of Law. "When things aren't transparent, that view is undercut."

In an email on Thursday, Koh declined a Reuters request for an interview on her sealing decisions in the Apple/Samsung case, or about her general policies. However, shortly after the inquiry from Reuters, Koh issued new guidelines governing sealed documents in her courtroom.

Koh's guidelines, posted on her official website, mandated that parties file a redacted, publicly available version of every document that they seek to seal -- at the same time they make the sealing request.

Koh and U.S. Magistrate Judge Paul Grewal, who oversees certain procedural motions in the case, are newcomers to the federal bench and were both previously intellectual property lawyers representing companies at large law firms. They have not only granted many of Apple and Samsung's sealing motions, in some cases, they've gone a step further.

During an October hearing on the proposed injunction, Koh, unprompted, asked Apple and Samsung if they wanted to seal the courtroom. When the lawyers said such a step wouldn't be necessary and that they would not mention confidential material during the hearing, Koh commented, "I guess if you all can be careful not to disclose anything that requires sealing, then we can still have that with the open public."

Representatives from Samsung did not respond to a request for comment on Thursday, and an Apple spokeswoman declined to comment.

Secrecy in the courts is an ongoing concern. The policy body of the federal courts recently reminded judges to limit broad sealing of cases, and interest groups such as Public Citizen and the American Civil Liberties Union frequently intervene in cases where major records are sealed.

For their part, investors look at briefs and filings to see what kind of effect a patent is having on the marketplace, professors study them for novel legal theories, and lawyers track them for developments in intellectual property law.

Like Koh, many federal judges routinely grant requests to seal documents. In the Eastern District of Texas, where the docket is always clogged with patent cases, lawyers don't even need permission from the judge to file documents under seal, said Michael Smith, an IP attorney who practices there.

"The court has made it as easy as they possibly can," Smith said.

The release of Samsung's redacted brief this week demonstrates some of the inconsistencies in what gets sealed, and why.

Samsung said references to other confidentially-filed motions in the case justified its sealing, and Apple did not object.

When there isn't pushback from one of the parties, judges typically grant sealing requests without much scrutiny, said Chao, the University of Denver professor.

"I think at times they are just overwhelmed," Chao said.

Even contemplating closing a courtroom, as Koh did, shows an unusual level of accommodation to the parties, said Richard Marcus, a professor at University of California Hastings College of the Law, and can also erode trust in the courts.

"Locking the courthouse doors in a trial-like situation is extremely rare and requires exceptional circumstances," he said.

In fact, 50 miles from the Samsung/Apple battle, U.S. District Judge William Alsup in San Francisco has taken the opposite tack in the monster IP fight between Oracle and Google over the Android operating system.

Since Oracle brought suit in August 2010, Alsup has rejected more than a half-dozen requests from the companies to keep material secret and issued a number of harsh warnings.

Among other documents, Alsup unsealed an email drafted by a Google engineer saying Google needed to negotiate a license for Java -- the programming language Oracle has accused Google of infringing.

Google investigated alternatives to Java for Android and concluded "they all suck," the email said. Alsup even read the email aloud during a July hearing. (Google has asked an appeals court to overturn the unsealing).

"The United States district court is a public institution, and the workings of litigation must be open to public view," Alsup wrote in an October order. Alsup declined to comment, as did an Oracle spokeswoman. Google representatives did not respond to a request for comment.

For David Sunshine, a New York lawyer who tracks technology cases for hedge fund investors, judges like Alsup who challenge companies on sealing requests make the job much easier. "I love those guys," Sunshine said.