WHEN EDO NORTH SURRENDERED TO OSHIOMHOLE 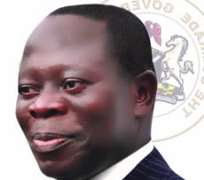 •Oshiomhole
They waited patiently for hours, not minding the scorching sun. From 9:30am, venue of the much awaited declaration was already filled to capacity, no parking space as all the adjoining roads and streets were completely taken over by cars and chartered buses.

It was Saturday, November 5, 2011 when the strong man of Fugar politics in Edo North, Chief Steve Alao, the Yerima Fugar led other People Democratic Party (PDP) Chieftains and their teaming supporters to join forces with the Action Congress of Nigeria (ACN).

It was more of a carnival than mere political declaration as traditional dance troops from the 10 wards that make up Etsako Central Local Government came out enmass to add colour to the occasion, blended with the music of Sir Waziri Oshiomha who was on hand with his live band.

The long wait eventually paid off when the big masquerade, leader of the ACN in the state, Comrade Adams Oshiomhole arrived at about 3.05pm with his entourage. The crowd went hysterical on hearing the siren heralding the coming of Oshiomhole. It was as if they had seen their God in human flesh.

With the various praise songs, the security personnel had hectic time before they could put the overwhelmed crowd under control for the take-off of the event proper.

One of the decampees who was a returning officer of the PDP in the last April general elections for ward three, Dr. Andrew Iteghie told Daily Sun that 'this is a great day in the political history of the local government. No man has seen God, man is God in our lives. All these years, we have been in darkness. Thank God we have left darkness for light. No more politics of deception'. The US trained optomologist said all the dirty jobs he did for the PDP in the last general election was never appreciated by the party and its local leaders who he described as selfish and self-centered.

In the governors entourage from Benin were the leader of the ACN in Edo State, Arc Tom Ikimi, leader of the Grace Group and National Vice Chairman of the party for the South-South Zone, Pastor Osagie Ize-Iyamu, immediate past party Chairman, Chief Tony Omoage, his successor, Barrister Thomas Okosun, members of the state executive council and other party chieftains from the state and local government.

Oshiomhole was heralded to the podium with his popular song at such rallies. The song has literally become the anthem of the ACN because of the party's outstanding performance in the delivery of democracy dividends across the 18 Council Areas in the State. Waziri Oshiomha who is one of the area leaders in the Local Government and of course, the official musician of the party started the rendition' why we no go do yanga, we must to do yanga, I say do yanga, do yanga', the teaming crowd took it over. The old ones who were too weak to stand were busy swinging their frail frames on their seats as the governor danced his way to the podium.

When he took the microphone, the comrade was in his elements. He derogatorily described the PDP as Papa Deceive Pikin, People Deceive People, Poverty Development Party. He told the charged crowd that the PDP has been deceiving the people over the years. Some of the deceptions, according to the Governor, was that the make up the local government was on a rocky terrain, hence the ACN does not have borehole as the water table was not reachable. But today virtually all the wards have properly drilled boreholes with water pumping out to meet the domestic needs of the communities. Aside this, he said the entire communities are already being linked with asphalted road network. Even the riverine areas of Ekperi land which were hitherto considered impossible terrain have been opened up. Oshiomhole assured the people that they had seen nothing yet in terms of democracy dividends.

He simply described the declaration as Tsunami and subsequently handed over brooms, symbol of the partly to leaders of the decampees in the 10 wards, charging them to sweep away the PDP vestiges in the local government.

Among those who led their teaming followers to join the ACN were chief Steve Alao, Abuja-based businessman and National President of Miners and Processors of Barities who had been a major financier of the PDP in Edo North, former Secretary of the PDP in the Local Government, John Do, National Secretary of Fugar Progressive Union who was also the former Director of Sports in Edo State, Sir Rowland Enebamho, Daniel Ikoh, former ACN candidate for the State House of Assembly in the last general elections and John Umoru, otherwise known as Matamata a man with a well-know family history of die-hard politicians in Ogbona, the same community with the State Chairman of the PDP, Chief Dan Orbih. By this, the comrade governor has taken the battle to the door step of Dan Orbih and Mike Ogiadomhe as the real political aggressor.

To keen observers of Edo politics, the Saturday declaration meant a lot to the Comrade Governor. The Local Government is home to some big fishes in the Government who have been using the federal might to manipulate votes in favour of the PDP. But today, most of their foot soldiers and commanders have dumped them and embraced the comrade governor and the ACN. Dan Orbih, Chairman of the PDP in Edo State has never lost Ogbona, which is ward 4 in any election. The ward has always been the only one standing even in the face of stiff resistance from the ACN. Chief of Staff to the president, Chief Mike Ogiadomhe was another hard nut to Oshiomhole in Fugar, a town with three wards with high population. Fugar is the country home of former Chief of General Staff, Admiral Mike Akhigbe a PDP chieftain.

They have been teaming up to wreck electoral havoc in the town against the ACN. Brig-Gen Alfred Ilogho, Former ECOMOG Commander and former JTF Commander held the fort in Iraokhor ward 5. But Oshiomhole moved swiftly to woo General Luke Ajiamha (Rtd) to neutralize the influence of Ilogho in that ward. At the Saturday declaration, the governor aptly described Ajiamha as the General of Generals.

With this, the comrade governor seems to have completely caged the PDP influence in the local government. However, the July 14, 2012 governorship election in the state will serve as the test case to determine who is really in control of the votes.