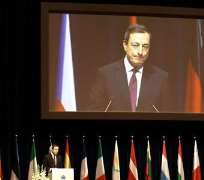 The new head of the European Central Bank signaled Thursday it was ready to take stronger action to fight Europe's debt crisis if political leaders agree next week on much tighter budget controls in the 17-nation euro zone.

"What I believe our economic and monetary union needs is a new fiscal compact -- a fundamental restatement of the fiscal rules together with the mutual fiscal commitments that euro area governments have made," he told the European Parliament.

"We might be asked whether a new fiscal compact would be enough to stabilize markets and how a credible longer-term vision can be helpful in the short-term. Our answer is that it is definitely the most important element to start restoring credibility.

Draghi did not spell out what action the ECB might take, but it is under huge political and market pressure to massively step up purchases of euro zone government bonds or to lend money to the IMF to support ailing Italy and Spain.

In response to lawmakers' comments, he added that the ECB had scope to act within the European Union treaty and the most important thing was to make sure that frozen credit channels start to work again.

In the short-term, economists expect the central bank to relieve pressure on banks and an economy heading into recession by announcing longer-term cheap liquidity tenders with easier collateral rules and cutting interest rates next week.

Draghi, who faces some of the toughest decisions in the currency's 12-year history after just one month in the job, said the ECB was aware many European banks were in difficulty because of stress on sovereign bonds, tight inter-bank funding markets and scarce collateral.

"Downside risks to the economic outlook have increased," he said, noting that the ECB's mandate was to maintain price stability "in both directions" -- a rare indication that the bank is concerned about deflation risks as well as inflation.

The euro and European stocks were steady after surging Wednesday after the joint intervention by the Federal Reserve, the ECB and the central banks of Japan, Britain, Canada and Switzerland.

But safe-haven German bond futures crept up further after Draghi said the ECB's bond-buying program was only temporary and limited.

Spain and France both found strong demand for bonds at auctions Thursday, cheering markets, but Madrid had to pay sharply higher yields above 5 percent on 4, 5 and 6-year debt.

DAYS TO SAVE EURO?
European Union leaders hold a crucial summit on December 9 at which EU paymaster Germany is pressing for an agreement on treaty change to establish coercive powers to veto national budgets in the euro zone that breach agreed rules.

That prompted the chief financial officer of the European Bank for Reconstruction and Development, Manfred Schepers, to tell a Dutch newspaper: "There are seven work days left to save Europe."

Berlin wants the European Commission to be empowered to reject national budgets before they go to parliament and to refer serial deficit offenders to the European Court of Justice.

That is highly controversial in France, which is working on joint proposals with Germany to be put to EU partners next week.

President Nicolas Sarkozy was due to outline his vision of closer euro zone integration in a speech in the Mediterranean port city of Toulon Thursday evening (1730 GMT) and German Chancellor Angela Merkel will set out her views to parliament in Berlin Friday.

Sources close to the negotiations said they had not yet reached agreement on key issues including the role of the EU executive and court, with Paris preferring an intergovernmental approach leaving the final word with elected leaders.

The conservative Sarkozy's main challenger in next year's presidential election, Socialist Francois Hollande, said on Wednesday that as president he would never hand France's budget sovereignty over to European judges.

With the ECB formally barred by treaty from acting as lender of last resort to the euro zone or directly financing governments, EU officials are working on ways to support states under bond market pressure via the International Monetary Fund.

One idea under active consideration is allowing euro zone national central banks affiliated to the ECB to lend money to the IMF which could provide larger credit lines for Italy and perhaps Spain on strictly monitored policy conditions.

That fuelled momentum for a global deal to boost the Fund's resources, although many other major economies want to see the euro zone put more of its own firepower on the line to defeat the debt crisis before they make commitments.

China's vice finance minister said the euro zone had made "positive progress" by agreeing this week to ramp up the firepower of its rescue fund but Beijing hoped to see more progress at next week's EU summit.

"The current crisis, to some extent, is more serious and challenging than the international financial crisis following the fall of Lehman Brothers," Zhu Guangyao told a trade forum.