THE FIRST LADY AND THE PREGNANT AFRICAN WOMEN 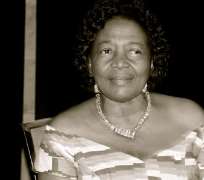 For the past years, the Ghana’s enlightenment movement have shown that rational choices are essential to how Africans distinguish and argue about their culture in relation to their progress. The enlightenment campaigners have identified cultural challenges – from the impact of witchcraft to developing policies from within the African culture – and raised their consequences should Africans continue to integrate their cultural values into their formal development process.

The ‘City Forum on Culture and Development,’ a multi-sectorial undertaking that took place recently and was opened by Prof. Kofi Awoonor, chair of Ghana’s Council of State, at the Accra International Conference Centre, demonstrates the influence of the enlightenment movement on national thinking. More so the fact that the City of Accra, Ghana’s Ministry of Trade and Industries, Arterial Network, UNESCO, Goethe-Institut, Agenda 21 and Accra Arts and Culture Network participated in the culture-progress seminar.

These activities reject the notion in some quarters that African women aren’t discussed fully in the advancement crusades. In all measure, the enlightenment movement is an eclectic enterprise. More so in dealing with the traditional values that have been entangling African women’s development.

Of particular footnotes are certain aspects of the culture that enmesh African women and stifle their greater progress. Despite modernity, certain cultural practices still block the progress of African women, making them live not only bumpy lives but sometimes being endangered. The on-going enlightenment movement and the rigours of democratic tenets are increasingly opening the cultural predicaments affecting African women for better deliberations. Human rights, the rule of law, social justice, freedoms and equality are helping to make life better for African women who are normally supressed by Africa’s patriarchic culture.

Such climate has helped Ghana’s First Lady, Ernestina Naadu Mills, without any hesitations, to enjoin Ghanaians, especially the rigid traditionalists who won’t let go certain archaic cultural practices that impact negatively on progress, to review and eradicate the cultural values that have been entrapping African pregnant women, and made them live either uncomfortable lives or die pre-maturely when giving birth.

(Naadu Mills joins long list of elites who are taking on certain parts of the African culture that makes live unbearable for Africans. She brings into the enlightenment movement balance and deep thoughtfulness, experience, deep knowledge of the African culture, African women issues, and wisdom)

In most African pregnancy universe, inhibiting traditional believes such as witchcraft interfering with pregnancies rejects modern ante-natal and delivery care. The consequences could be dire. This is partly responsible for the swell in African maternal mortality rates despite attempts by modern medicine to halt it.

Some African women are prevented by their families, who are stuck in awkward superstitions, from going to hospital for ante-natal and delivery care. Home deliveries, without proper medical supervisions, are thought to be cool. The pregnant women are exposed to “high risks of facing complications which might further cause them their lives,” Naadu Mills, an accomplished educationist, revealed.

Part of the reasons underlying such erroneous thinking come from certain irrational believes in the African culture. The Nigerian, Chinazo Echezona-Johnson, who writes on African women, their pregnancies and children in their traditional setting, explains that certain African cultural superstitions impinge on pregnancy so much so that, “It is believed that witches and evil spirits are capable of stealing the pregnancy or interfering with it. So the pregnant woman is not allowed to mix with the known witches in the neighbourhood or allow strangers to rub her stomach. Furthermore, the woman is not allowed to attend some social functions, or perform some social tasks. For instance, the woman may not be allowed to go to some funerals or involve with any morbid social issues.”

Disturbingly strange believes! Its implications are Africa’s high pregnancy-related deaths. While African Union has minted “Campaign for Accelerated Reduction of Maternal Mortality In Africa,” the high maternal mortality rate cannot be explained away as caused mainly by poverty, diseases, or lack of medical facilities.

But also strange cultural believes that ensnare pregnant African women. This is not acceptable, especially under the current enlightenment climate that aims, among other intentions, to free the African from the yoke of unnecessary cultural burdens that have gridlocked his or her greater progress. That makes culture a serious matter in Africa’s progress. If possible, some parts of the African cosmology that makes life agonizing for Africans should be tweaked. UNICEF, the UN agency charged with maternal health, among missions, says, “A woman in sub-Saharan Africa has a 1 in 13 chance of dying in pregnancy or childbirth, compared to a 1 in 4,000 risk in a developed country.”

If the same African culture argues that “pregnancy is a sign of reincarnation of ancestors” and that “Africans believe that ancestors return to their loved ones through the birth of new infants,” then it is contradictory if certain parts of the same culture cause pregnancy-related deaths. How would the ancestors reincarnate? How would they return to their loved ones if pregnant women die pre-maturely?

Rather, the fine-tuning of certain parts of the culture that cause pregnancy-related death through the on-going African democratic revolutions will help enhance the beautiful cultural believes that pregnancy is a sign of reincarnation of ancestors who return to their loved ones through the birth of new infants.

Very low maternal mortality, as is the case in the developed world, in an enlightened atmosphere, would make such traditional believes cool even in modern settings and enhance this aspect of the African cosmology.