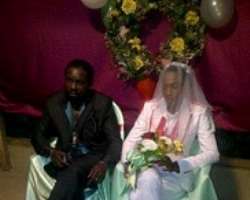 The senate passed a bill on Tuesday, November 29th, 2011 outlawing same-s*x marriage in Nigeria as well as banning public displays of affection between homosexual couples.

The bill, which still must be approved by the House of Representatives and signed by President Goodluck Jonathan, spells out a 14-year jail term for anyone involved in same-s*x marriages.

Those who abet or aid such unions could be given 10 years.

British Prime Minister David Cameron has warned that his country will consider withholding aid from countries that do not recognise gay rights.
Senate President David Mark said during debate on the bill on Tuesday that “our values are our values.”

“If there is any country that does not want to give us aid or assistance just because we want to hold on to our values, that country can keep her aid and assistance,” he said.