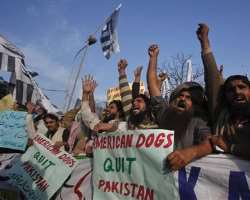 SUPPORTERS OF THE ISLAMIC ORGANIZATION JAMAAT-UD-DAWA HOLD PLACARDS WHILE SHOUTING ANT-AMERICAN SLOGANS DURING A DEMONSTRATION IN LAHORE NOVEMBER 29, 2011.
Listen to article

A senior Pakistani army official has said a NATO cross-border air attack that killed 24 soldiers was a deliberate, blatant act of aggression, hardening Pakistan's stance on an incident that could hurt efforts to stabilize Afghanistan.

Islamabad decided on Tuesday not to attend a major conference on the post-2014 future of Afghanistan in Germany next week, an angry riposte to the attack that threatens to set back peace efforts in Pakistan's troubled neighbor.

Continuing Pakistan's angry tone, Major General Ishfaq Nadeem, director general of military operations, said NATO forces were alerted they were attacking Pakistani posts but helicopters kept firing. His comments, from a briefing to editors, were carried in local newspapers on Wednesday that characterized the attack as blatant aggression.

"Detailed information of the posts was already with ISAF (International Security Assistance Force), including map references, and it was impossible that they did not know these to be our posts," The News quoted Nadeem as saying at the briefing held at army headquarters on Tuesday.

NATO helicopters and fighter jets attacked two military border posts in northwest Pakistan on Saturday in the worst incident of its kind since Islamabad allied itself with Washington in 2001 in the war on militancy.

Fury over the attack is growing, with another protest in the city of Lahore and more tough editorials in newspapers.

The helicopters appeared near the post around 15 to 20 minutes past midnight, opened fire, then left about 45 minutes later, Nadeem was quoted as saying. They reappeared at 0115 local time and attacked again for another hour, he said.

Nadeem said that, minutes before the first attack, a U.S. sergeant on duty at a communications centre in Afghanistan told a Pakistani major that NATO special forces were receiving indirect fire from a location 15 km (9 miles) from the posts.

The Pakistanis said they needed time to check and asked for coordinates. Seven minutes later, the sergeant called back and said "your Volcano post has been hit," Nadeem quoted the sergeant as saying.

Nadeem concluded that confirmed NATO knew the locations of the Pakistani posts before attacking, said The News.

The army released a video to the media showing what it said were the Pakistani border posts -- rough constructions of large stones, corrugated metal and canvas in isolated positions.

Filmed from a helicopter, it also showed foxholes and what appeared to be a mortar emplacement surrounded by rocks.

REINVIGORATED MILITARY
The NATO attack shifted attention away from Pakistan's widely questioned performance against militants who cross its border to attack U.S.-led NATO forces in Afghanistan, and has given the military a chance to reassert itself.

Islamabad's decision to boycott next week's meeting in Bonn will deprive the talks of a key player that could nudge Taliban militants into a peace process as NATO combat troops prepare to leave Afghanistan by the end of 2014.

"Nothing will be gained by turning our backs on mutually beneficial cooperation," Clinton told reporters in South Korea.

The army, which has ruled Pakistan for more than half of its history and sets security and foreign policy, faced strong criticism from both the Pakistani public and its ally, the United States, after the raid that killed Osama bin Laden.

The al Qaeda leader had apparently been living in a Pakistani garrison town for years before U.S. special forces found and killed him in a unilateral raid in May.

Pakistanis criticized the military for failing to protect their sovereignty, and angry U.S. officials wondered whether some members of military intelligence had sheltered him. Pakistan's government and military said they had no idea bin Laden was in the country.

The army seems to have regained its confidence, and won the support of the public and the government in a country where anti-American sentiment runs high even on rare occasions when relations with Washington are healthy.

More than 1,000 students from a hardline Pakistani religious party protested in Lahore, yelling "Death to NATO" and "Death to America."

"If NATO and America do something like this again, we are going to turn Pakistan into their graveyard," said 23-year-old university student Zahoor Ahmad.

History student Mudassir Durrani said: "This attack is a slap in the faces of the Pakistanis who support America. It is time for secular and religious forces to come together to fight America."

NATO hopes an investigation it promised will defuse the crisis and that confidence-building measures can repair ties.

But the military is firmly focused on NATO, and analysts say it is likely to take advantage of the widespread anger to press its interests in any future peace talks on Afghanistan.

The army is well aware that many Pakistanis believe the war on militancy their country joined has only served U.S. interests while thousands of Pakistani soldiers have died fighting.

"The leadership has no choice but to condemn it (NATO). The anger in the public is phenomenal."

In the town of Dera Ismail Khan, social worker Umar Mehsud, 28, echoed the thoughts of many furious Pakistanis.

"Our leaders are asleep, oblivious to the problems of the people. It is sad and worrying that we are being bombed by a country which calls us a major ally," he said.

While officials on either side of the border disagree on the circumstances of the incident, it is possible that a retaliatory attack by NATO troops took a tragic, mistaken turn in harsh terrain where differentiating friend from foe can be difficult.

Nadeem was adamant NATO had been told it was attacking Pakistani positions. "They continued regardless, with impunity," The News quoted him as saying.