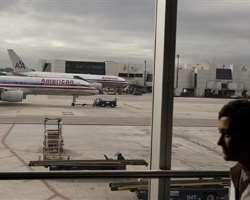 A PASSENGER WALKS TO BOARD AN AMERICAN AIRLINES AIRPLANE AT MIAMI INTERNATIONAL AIRPORT IN MIAMI, FLORIDA NOVEMBER 29, 2011.
Listen to article

American Airlines filed for bankruptcy protection on Tuesday to cut labor costs in the face of high fuel prices and dampened travel demand, capping a prolonged descent for what was once the largest U.S. carrier.

AMR Corp, the parent of American Airlines, also filed for bankruptcy and replaced its chief executive.

The company, which employs about 88,000, has been mired for years in fruitless union negotiations, complaining that it shoulders higher labor costs than rival domestic and foreign carriers that have already restructured in bankruptcy.

"The world changed around us," incoming Chief Executive Tom Horton told reporters on a conference call. "It became increasingly clear that the cost gap between us and our competitors was untenable."

American plans to operate normally while in bankruptcy, but the Chapter 11 filing could punch a hole in the pensions of roughly 130,000 workers and retirees.

AMR pension plans are $10 billion short of what the carrier owes, and any default could be the largest in U.S. history, government pension insurers estimated.

Ray Neidl, aerospace analyst at Maxim Group, said a lack of progress in contract talks with pilots tipped the carrier into Chapter 11, though it has enough cash to operate. The carrier's passenger planes average 3,000 daily U.S. departures.

"They were proactive," Neidl said. "They should have adequate cash reserves to get through this."

PROBLEMS TO ADDRESS
Bankruptcy gives AMR a chance to pare less profitable operations, and could result in the sale of flight routes. The process also gives AMR more flexibility, according to Jack Williams, a professor of law at Georgia State University.

But analysts question whether the bankruptcy will address operational shortcomings that have eroded revenue.

"Bankruptcy is not necessarily the be-all, end-all," said Helane Becker, an analyst with Dahlman Rose & Co. "They've got more problems to address in addition to the cost problem."

Shares of rival airlines rallied on expectations that reduced competition could boost fares. AMR had kept a lid on industrywide fares in its effort to keep its airplanes full.

AMR shares were halted 28 times on the NYSE on Tuesday for triggering a circuit breaker rule, activated when a stock moves up or down at least 10 percent within five minutes.

SLIMMED-DOWN AMR
In its bankruptcy petition filed in Manhattan, AMR reported assets of $24.72 billion and liabilities of $29.55 billion. The company has $4.1 billion in cash.

One bankruptcy rule is "don't wait too long," Harvey Miller, a partner at Weil, Gotshal & Manges representing AMR, said at a court hearing. "Don't wait until the course is irreversible. That is what American Airlines is doing today."

"It's possible they are still in negotiations and don't want to put something on paper that might prejudice those negotiations," he said.

Experts believe AMR stands to save billions by restructuring its obligations in bankruptcy.

"I imagine the company can save between $1.2 billion to $1.5 billion in labor costs, in addition to savings on repair and maintenance and better fuel burn," he said.

MERGER IN THE OFFING?
AMR said the bankruptcy has no direct legal impact on non-U.S. operations. It also said it was not considering debtor-in-possession financing.

But it could susceptible to unsolicited takeover bids from rival carriers. AMR has long said it could thrive on its own.

Robert Herbst, an analyst with AirlineFinancials.com and a former American pilot, said there was a "95 percent" chance American would join up with another carrier within two years.

"US Airways is probably toward the top of the list but it wouldn't be the only (potential merger partner)," he said.

A US Airways representative did not immediately return a phone call seeking comment.

Most large U.S. carriers are the products of mergers.

US Airways and United Airlines filed for bankruptcy protection in 2002, and Delta and Northwest in 2005. US Airways had tried to buy Delta out of bankruptcy.

American Airlines said it would remain an active member of the oneworld global airline alliance.

LABOR PAIN
American struggled with labor costs despite massive concessions from unionized workers in 2003, which enabled it to avoid Chapter 11 at the time.

"If you look at all of the elements of the problem, they all stem back to costs," he said. "It hasn't cut capacity effectively given the constraints" that labor placed.

"While today's news was not entirely unexpected, it is nevertheless disappointing that we find ourselves working for an airline that has lost its way," David Bates, president of the Allied Pilots Association, said in a statement.

A wave of pilot retirements this year prompted speculation of a Chapter 11 filing, given that the retirements could preserve pensions that might be at risk of being terminated.

"The 18-month timeline allotted for restructuring will almost certainly involve significant changes to the airline's business plan and to our contract," Bates said.