NIGERIA'S CRISIS OF UNDERDEVELOPMENT AND THE SEARCH FOR FOREIGN INVESTORS 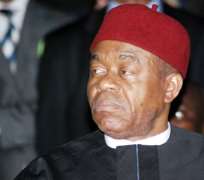 Only recently, the governor of Abia state - T.A. Orji, came back from a long vacation abroad and declared to the people of the state that he used his vacation to meet with investors in the United States and elsewhere. He explained that one of them would be coming to build a dialysis centre in the state. He further disclosed that he had made contacts with investors in the oil and gas industry. Sadly, this declaration from the governor vividly illustrates a major sickness which seem to have possessed Nigeria’s governing elite. It is a sickness which I choose to describe as “the investment paradox.” This refers to a condition in which Nigeria’s political elite mismanage the affairs of statecraft, loot the treasury, and squander the enormous resources meant for developing their country. They stash away their ill-gotten booty in foreign bank accounts, buy up exotic mansions and set up industries (such as refineries) outside the shores of Nigeria. In short, they “invest” the proceeds of their corruption and criminal looting in the economies of foreign nations!

Having bastardized governance and created the objective conditions for Nigeria’s approximation to “a failed state,” they turn around and begin to make an elaborate show of “seeking for foreign investors” to come in and invest in our ghastly, beggarly, cadaverous economy. Amazingly, Nigeria’s ruling elite has made (and continues to make) an interesting religion out of their neurotic search for foreign investors. From the local government chairmen, to state governors, federal ministers, and worst, president, the mindsets remain tragically the same.

In the guise of seeking and waiting for foreign investors, the country’s elite has ran the nation’s healthcare system aground and have left our hospitals ill-equipped, under-staffed, and poorly funded. At the slightest suspicion of malaria, they jet out to foreign countries to give themselves – and their families – the best of hi-tech Medicare. While they are busy searching for foreign investors, they have deliberately and mindlessly supervised the virtual destruction of public educational system in the whole of the country. True to their character, they have awarded to themselves and their cronies, the exclusive prerogative of running elitist private secondary and tertiary education to facilitate the inculcation of reactionary and conservative values in the minds of a marginalized generation of youths, while also ensuring that their drive for primitive accumulation through unscrupulous profiteering continues unhindered. By this singular tragedy of privatising education, the hapless, unlucky children of poor and middle-class parentage are effectively locked up in the pigeon-hole of oppressive ignorance, mediocrity and cyclical poverty, incapable of making any rational judgement in regard to the ominous connection between their wretched existence and the harrowing misgovernance of political leadership.

Unarguably, the autocratic incompetence and moral corruptibility of Nigeria’s ruling class has defeated all prospects of societal progress and transformation. However, it is in the sphere of manufacturing and industrialization that their ineptitude and visionlessness have had a most devastating impact. By sabotaging (through corruption) the provision of steady power supply and other critical infrastructures (such as an efficient transportation system), coupled with the creation of an operating environment that is inhospitable and insupportable to private business, they have effectively driven a nail in the coffin of the nation’s industrial sector, leaving an ever-diminishing number of surviving manufacturing concerns with the only option of relocating in droves to neighbouring countries. In effect, this sad trend has inevitably reinforced our import dependency and growing marginality in global trade, escalated our debilitating unemployment level, and created social tension and widespread instability, as well as deep-seated pain, misery and palpable anger amongst the citizenry. Surprisingly, in the midst of this horrific record of leadership performance, Nigeria’s political leadership persist in their obsession with the necessity of “attracting foreign investors.”

On countless occasions, I have had the misfortune of being inundated with the heroic achievements of governor T.A. Orji in Abia state. Realistically, if the governor has been so fantastic in his state in a period of almost five years that he has been in the saddle, why would he abandon the “Wonderland” that he has made of Abia state in preference for a sabbatical refuge in saner and better-organized societies abroad – societies that have been developed and transformed by leaders with spine, spirit, vision and statesmanship? Why didn’t the governor go to Aba, Ohafia, Ohuhu, Arochukwu or Ibeku to have a wonderful vacation? Of course, in a state where kidnapping has become the only flourishing industry, even the governor knows that doing so would be as costly as committing political suicide! And if a governor does not feel safe in a state in which he governs, or does not feel the need for relaxation in his own state, or even to patronize any of his state’s hospitals, schools and other public facilities, why dissipating energy and public resources travelling abroad ostensibly to go and invite strangers to come and “build a cathedral in the desert?”

In summary, it is a shocking commentary that those saddled with the task of developing the Nigerian society have, in their confusion, abandoned their historic responsibility for the socio-economic transformation of the country, and have shifted the burden to “perennially elusive foreign investors.” Our political elite has contrived a dubious impression which glorifies the “white man” as full of charity and altruism. They have projected him as loving Nigeria more than Nigerians love themselves or their country. Invariably, this odious notion reinforces the belief that without the commanding presence of this illustrious foreigner, without the assurance of redemption that comes from his talismanic investments, our situation is totally helpless and irredeemable.

Ironically, while we are busy awaiting (in vain) for the messianic arrival of this saviour called “foreign investors,” the home economies of these much-awaited investors continue to bubble with the looted funds and other priceless economic assets stolen and stashed away in such distant territories by our debauched, sybaritic, rapacious and corruption-personified politicians and their surrogates in the private sector.