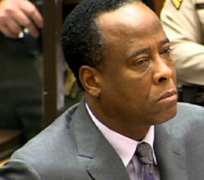 Dr. Conrad Murray was sentenced Tuesday to four years in jail -- the maximum sentence allowed under the law -- in the death of Michael Jackson.

Judge Michael Pastor, in a lengthy statement delivered before sentencing Murray for involuntary manslaughter, said he felt a significant responsibility to determine the appropriate sentence, utilizing his "sense of fairness and decency."

Pastor said that while he had considered the entire "book" of Murray's life, he also had "read the book of Michael Jackson's life."

"Regrettably, as far as Dr. Murray is concerned, the most significant chapter, as it relates to this case, is the chapter involving the treatment, or lack of treatment, of Michael Jackson."

Jackson died "not because of an isolated one-off occurrence or incident," Pastor said. "He died because of a totality of circumstances which are directly attributable to Dr. Murray ... because of a series of decisions that Dr. Murray made."

Murray, he said, became involved in "a cycle of horrible medicine."

He cited Murray's "pattern of deceit and lies. That pattern was to assist Dr. Murray."

A tape recording of Jackson's slurred voice was Murray's "insurance policy," Pastor said. "It was designed to record his patient surreptitiously at that patient's most vulnerable point. I can't even imagine that happening to any of us because of the horrific violation of trust."

He said he wondered whether that tape would have been offered for sale, had Jackson not died and a rift had developed between the two in the future.

Murray was convicted of involuntary manslaughter three weeks ago after a trial in which prosecutors successfully argued that Murray's reckless use of the surgical anesthetic propofol to help Jackson sleep, without proper monitoring equipment, led to the singer's death.

Testimony during the trial revealed that Murray gave propofol nearly every night in the two months before the singer's death on June 25, 2009, as Jackson prepared for his comeback concerts set for London the next month.

Prosecutors asked for the maximum four years behind bars, and for Murray to pay Jackson's children more than $100 million in restitution. Defense lawyers requested probation.

In a sentencing memo filed with the judge last week, prosecutors said Murray has "displayed a complete lack of remorse" about Jackson's death, and is, "even worse, failing to accept even the slightest level of responsibility."

Deputy district attorneys David Walgren and Deborah Brazil cited Murray's decision not to testify in his own defense, even while he was giving interviews for a documentary that aired days after the verdict.

"In each of these interviews, the defendant has very clearly stated that he bears no responsibility for Michael Jackson's death," the prosecutors said. "Moreover, the defendant has continued to express concern only for his individual plight and portrays himself, not the decedent, as the victim."

"I don't feel guilty because I did not do anything wrong," Murray said in the documentary quoted by the prosecution.

"Finally, the defendant consistently blames the victim for his own death, even going so far as to characterize himself as being 'entrapped' by the victim and as someone who suffered a 'betrayal' at the hands of the victim," the prosecutors said.

The defense argued that Jackson, fearing the comeback concerts could be canceled if rehearsals did not go well, put intense pressure on Murray to help him sleep.

The prosecutors contended in their sentencing memo that Murray should be ordered to pay Jackson's three children restitution for the "wage and profits lost," as provided under California's "victim's bill of rights" law.

The singer's "estate estimates Michael Jackson's projected earnings for the 50-show O2 concert series to be $100 million," the prosecutors said.

With nearly $2 million in funeral expenses and 10% interest added each year, the prosecution is asking Pastor to order Murray to pay Prince, Paris and Blanket Jackson more than $120 million in restitution.

While it is doubtful that Murray, who is unlikely to ever practice medicine again, could pay very much of that sum, it could prevent him from reaping financial benefits from any books, interviews or film projects in the future.

Defense lawyers, in their sentencing memo, included a biography of Murray that described him as "a self-made man of humble origins," who paid his own way through medical school without scholarships or family funds.

"He was raised in a home that lacked indoor plumbing or electricity, and he walked to school barefoot for his first couple years of school," the defense said.

He worked as a doctor for 20 years, with "no prior contacts with the law," and many of his patients were elderly in low-income, underserved communities, the defense said.

"It seems reasonable that the transgression for which he is to be judged should be viewed within the context of the larger life of which it is a part," it said.

The defense challenges the prosecution's contention that Murray is not remorseful.

"Dr. Murray wishes to make it unmistakenly clear to everyone that he deeply mourns the loss of Michael Jackson's life, and he profoundly regrets any mistakes or oversights on his part that may have contributed to it," the defense said.

The judge should also consider "the manifold collateral consequences that Dr. Murray has sustained as a result of his mistake," the defense said, including the loss of his medical career, the public disgrace and loss of privacy.

"Dr. Murray has been described as a changed, grief-stricken man, who walks around under a pall of sadness since the loss of his patient, Mr. Jackson," the defense said.

The defense memo included a letter from Murray's elderly mother, Milta Rush. She sat in court for much of her son's trial, just a few feet away from Jackson's mother.

"I sympathize with Mrs. Jackson as a mother," Rush wrote in a letter to the judge. "I sense she was very close to her son. I really wanted to approach her personally and tell her I am sorry for the loss of her son, but I was unsure if she would be receptive, and I did not want to take the chance of violating court rules. I am sorry for all her loss."

Murray's mother also told the judge her son is "saddened and remorseful" about Jackson's death.

The defense argued that Murray was trying to help Jackson. "His compassionate intentions should not be overlooked," defense lawyers said.

"The victim was a willing recipient of the medications administered," the defense said. "In fact, Mr. Jackson had repeatedly begged Dr. Murray for propofol to overcome his insomnia so that he could sleep."

Murray does not pose a safety threat to the public, the defense said in filings before the hearing. "The likelihood of recurrence is essentially nonexistent since Conrad Murray's medical license has been suspended."

Aside from the arguments of what Murray deserves, the defense contended that California's prison and jail crowding means that "neither the space nor the public funds exist to continue imprisoning nonviolent, nondangerous offenders who do not need to be incapacitated for the sake of public safety."

"Dr. Murray is clearly such a defendant," the defense said. "He is an individual who remained free on bond for more than two years prior to the jury verdict, adhering assiduously to all of the bond conditions that had been imposed."

If Murray takes up a state prison or county jail cell, it "may mean that someone else with higher potential for violence will be released," the defense said.

Instead, the defense proposed that Murray could be sentenced to community service along with probation.

"Though he will perhaps not again be a doctor qualified to make diagnoses, he could educate and counsel patients about heart care and disease prevention," it said. "There are many nonprofit clinics and organizations that would benefit from his participation, if ordered to perform community service as a condition of his sentence and a means of 'putting some water back into the public well.'"