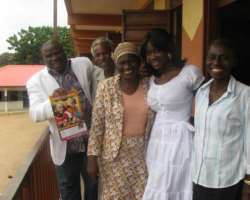 No matter the scandals that may have followed her around, one thing you cannot take away from Mercy Johnson is the love she has for her fans, especially the underprivileged ones.

And to express this love, the actress, alongside popular comedian, Gbenga Adeyinka, stormed some secondary schools in Ikeja, Lagos and distributed books and T-shirts to students.

Mercy, who claims to have been paying for 500 underprivileged GCE and JAMB candidates for the past five years, declared that the visit made her feel good as her interaction with them made her believe there is still hope for Nigeria.

Meanwhile, her foundation will be launched in February 2010. She told us that the major function of the foundation would be to cater for teenagers who cannot afford to pay for their JAMB and GCE examinations. Gbenga Adeyinka, in his own remarks, vowed to support the actress' foundation by raising funds to cater for the kids.