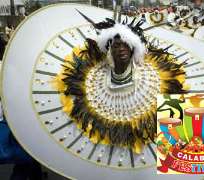 CALABAR, November 27, (THEWILL) - In a deliberate effort to ensure the sustainability of the famous 32 days Calabar Festival, the Cross River State Government says plans have been concluded to institutionalize the annual event.


Speaking during a breakfast briefing with journalists in Calabar, Friday, Cross River State Governor, Senator Liyel Imoke contended that the festival which has now gained international acceptability needs to be free completely from government influence if its overall objective of attracting economic activities that will impact directly on the people is to be achieved.


He maintained that over the years, the festival has grown in content and perspective which has added value to attract private sponsorship which hitherto was not achieved, adding “when we started this carnival it was difficult to get sponsors but today, the festival stands branded with sponsors.”

Imoke, who expressed delight over the sponsorship of the festival by Nigeria’s top brands, First Bank, Guinness and Dangote Group who he described as being the most dynamic and most powerful, stated that they came to invest because they have seen a product that has market which is made possible through hard work.

On the security of tourists giving the current situation in the country, the governor said he will not take any thing for granted as effort is being intensified to revamp the Emergency Response Centre and reposition it for quicker response while 20 independent special security squad is to be strategically located at various points in the state to check any breach of peace.

Answering why the Carnival should be allowed into the night, he said that the initiative was deliberate because the right period is the prime time that sponsors get value for their investment as most people will be glued to their television sets at that time to watch their products.

Senator Liyel Imoke further disclosed that some of the innovations at the event which he noted are indigenous to the state include water festival, theatre presentation amongst others.

Special Adviser to the Governor on Tourism Development and Chairman, Carnival Commission, Mr. Gabe Onah said the festival which will kick off with a Christmas tree lighting ceremony on November 30, will present another opportunity for the state to showcase to the world its best hospitality that will translate into economic gains to impact on the lives of the citizenry.