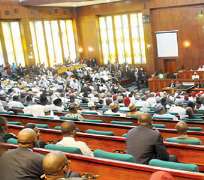 ABUJA, November 23, (THEWILL) - The House of Representatives today mandated its joint committee on finance and customs and excise to investigate over N276.9 billion in waivers and exemptions granted by the federal government.

At the sitting of the House presided over by Deputy Speaker, Hon. Emeka Ihedioha, the House also urged the federal government to revoke all existing waivers, exemptions and concessions that are not backed by extant law or protocol pending the outcome of the investigation which is expected to be concluded and the report made available to the House within four weeks.

This was the outcome of a motion by, Hon. Yakubu Dogara (PDP, Bauchi) who argued that from available customs records, the nation lost a whooping sum of N276, 943,087,154.09 billion between 2000-2008 due to indiscriminate granting of waiver, exemptions and concessions.

Dogara noted that, “government is yet to abate the practice of illegal and indiscriminate granting of waivers, exemptions, concessions to totally undeserving firms and individuals in spite of repeated resolutions of the House of Representatives urging it to put a stop to the practice.

“We are aware that not less than 183 undertakings and individuals are currently beneficiaries of waiver, exemptions, and concessions running into billions of monies that ought to have accrued to the federation account as Revenue.

“We are disturbed that waivers, exemptions and concessions reduce revenue accruable to government which ought to be paid into Federation Account from which no withdrawals can be made except in a manner prescribed by the National Assembly as enshrined in sections 80 and 162 of the 1999 constitution of the Federal Republic of Nigeria as amended.”

He said, “We are therefore concerned that waiving, exempting and concessioning future earning that would have accrued to government by the executive arm of government amounts to executive Appropriation contrary to sections 80 and 162 of the 1999 constitution of the Federal Republic of Nigeria as amended.”

In the mandate issued to investigate the alleged import waiver granted the Vaswani brothers promoters of the Stallion Group of Companies which according to the lawmakers deprived the nation of huge revenues, its sponsor, Hon. Mohammed Ahmed Wudil (ANPP, Kano) accused the federal government of granting frivolous import waivers to many foreign companies registered in Nigeria without due diligence.

THEWILL also recalls that the controversial Indian brothers were first deported from Nigeria in 2003 on allegations of criminal conspiracy, tax evasion, money laundering and economic sabotage. After government granted them pardon to return a few years later, another 21 top officials of the Stallion including the brothers were deported in April 2009 for similar offences but a court ruling declared their deportation illegal which paved way for their return.

Last week, Hon. Wudil noted that the federal government had granted Stallion Group/Vaswani brothers import waivers totaling about N50 billion on importation of rice into the country. He lamented that the waiver caused the government to lose billions of naira.