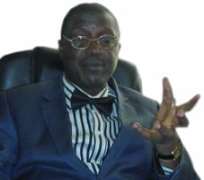 • David Walker Ogogo
With Nigeria's infrastructural deficit recently put at $200 billion (over N30 trillion) by the Managing Director of Urban Development Bank of Nigeria, Mr. Adekunle Oyinloye, there is an urgent need for increased private sector participation alongside the public sector in arresting the nation's infrastructural decay.

However, the Registrar/Chief Executive Officer of the Institute of Capital Market Registrar, Dr. David Walker Ogogo, has said that the Nigerian capital market is deep enough to fund the nation's infrastructural deficit.

This is in spite of serious depreciation in the prices of shares for the past three months, which has led to stocks value plummeting by over N1.3 trillion, and the lack of investors' confidence, which has continued unabated. In this exclusive interview with Daily Sun, Ogogo examined various issues in the capital market, and the economy at large.

Recently, the CBN raised its MPR to 12 per cent, what is the impact of this on the nation's capital market?

Well, the capital market and the money market works inversely. So, there are two ways to it. One, it means that those who want to borrow from banking industry will pay more money, and the publicly quoted companies may need bank facilities to finance some of their production or manufacturing activities or whatever it is. So that window will not be attractive to publicly quoted companies.

On the other hand, investors who own shares would want to sell-off their shares because dividends are not coming up and share prices are not moving the way they expect them to move, they will sell-off their shares and then put their money in money market instruments, because they know that they will earn more interests. So, it will bring down the activities in the capital market in favour of the money market.

Is there no other way the CBN can control inflation without raising the MPR?

The best way to control inflation in simple economics is to make sure that you do not have too much money in circulation. And another way is to make sure that there are enough products in the market because we are talking about money, and inflation means too much money in circulation and, because of that, prices go up. If you look at the manufacturers, if they are not encouraged to manufacture products, this means that the real sector will not be having enough money to do business and so, you have more money pursuing fewer products.

What the CBN or the monetary policy committee should be thinking about is how to ensure that the real sector is producing enough to take care of the consumption level of the populace. If that happens, of course, there will be so many things to buy when you get to the market…and everybody is working hard to produce something. Then you will see that inflation will be a little bit reduced because the real sector will be bubbling in business. But here, what we hear is money business, inter-bank transactions etc. If you buy shares and everything is happening in the capital market, in a way, you are encouraging production but if much is not happening in the capital market, the end result is that there will be so much money on ground pursing fewer goods and services.

Stockbrokers held their 15th annual conference in Edo State and the theme of the conference was 'Tackling the Nigeria Infrastructural Challenges: The Capital Market Solution'. And, we are made to understand that the Nigeria capital market can actually fund Nigeria infrastructural deficit but considering the situation of the market now, is the market deep enough to do that?

As it relate to deepness, the capital market is deep enough to take care of organizations that are coming in to raise money in connection with infrastructural development. They come in form of bonds like state government bonds, federal government bonds, they are all well subscribed to because these days people seems to favour fixed income securities like bonds because from the onset they know the percentage interest they are going to get and this is going to be paid to them from 6 months or thereabout. Moreover, when the Soludo was the CBN governor and the banks were asked to raise their capital to N24 billion, they all come to the capital market and they all got their monies from the capital market. In the same way, if organizations come to the capital market through bonds most especially for infrastructural development, they will get the monies they are looking for.

Securities and Exchange Commission is seriously talking about demutualization, what is your view towards that and is the Nigerian capital market ripe enough for it?

Demutualization is not a bad idea. I know the crÃ¨me and the cannibal of people in Nigerian Stock Exchange. They are young qualified crop of men and women with adequate international exposure. I think that they can do the demutualization with guidelines given by the SEC and the committee that was recently set up. They can do it. In the capital market, the only thing I think about the committee that was set up is that no single registrar is in that committee. Perhaps SEC fails to remember or they forgot that the registrars are the ultimate custodians of the nation's capital market, in order wards, we keep all the records and we maintain all the records, be the primary market activities or the secondary market activities, that is why they should have involve a registrar perhaps from the Institute of Capital Market Registrars to be represented in that committee.

But, be that as it may, I feel Nigeria capital market is ripe enough for demutualization provided the process is transparent enough. Let me tell you one thing, when the SEC launched the code of corporate governance, it was believed that SEC themselves will operate by the rules of that code but from the look of things, it is not very clear whether they are operating with the rules of corporate governance within themselves. So, those are some of the factors that affect the enthusiasm of the operators. As we appreciate what they are doing, we expect better transparency.

Since you joined the market, can you make a comparison with the situation of the market now and then?

I joined the capital market as far back as 1977 and then the market was growing in leaps and bounds. When you invest, you are sure of receiving your dividend, the share price is bound to be on the rise, and you are confident that you have something in store that can serve as a wealth in the future. Then also, not many people know about the capital market, it was only the indigenization decree that make the capital market a little bit popular and it brought about an increased and improved activities in the capital market. There was trust in the market then because if you meet with brokers to transact business, they will always live up to the expectations. When monies are given to brokers to buy stocks, they will actually buy the stocks because the playing ground was quite level, nobody was witch-haunting anybody because the economy globally and here was very stable.

Does it mean that now stockbrokers don't live up to expectations?

They do, but the business environment is a little bit very harsh now. They (brokers) live on commission let us not forget that. So, if there is a flouring of business coming in, then of course they will be able to leverage on the volume of the business coming in. so, even though they get a small percentage on every transaction that comes in, because the volume is much you will see that they will be smiling to the banks with so much money but that is not the case now because activities are low, investors confidence is also low.

When the investor confidence is low, it means that those that hold their shares may not want to sell or even buy. If stocks or companies come to the market to raise monies, they may not be able to buy. And of course, you know that when the market crashed towards the end of 2008, it affected all players but the stockbroking firms were the worst hit, that is why many of them have to close their shops, many of them were involve in one form of infractions or the other and they were suspended from the market. That is not to say that other operators in the market are not involve in one form of infractions or the other, but the rates are more with the stockbrokers.

Talking about investor's confidence, which you mentioned earlier, since 2009 till date, that has been the problem, capital market regulators want to tackle but we are not seeing any positive impact, what is the problem?

Well, the regulatory authorities to be fair to them, have been trying their best but the other question is, is their best good enough? Have they been transparent in their approach? Their best is perhaps not good enough. Why do I say so? When you talk about regulatory body in the capital market, the apex regulatory body is the Securities and Exchange Commission (SEC) but what is the perception of SEC by operators and even with people that work with SEC itself?

The perception the operators have is that, we are not involved in their strategic projects. For instance, several committees were set up in the past, the Registrar IT Infrastructure review committee, the dematerialization and other committees were set up to discuss matters affecting the market and to see how the market can forge ahead but the recommendation of these committees have not been implemented instead what we are seeing is a number of foreign consultants coming in to consult for SEC introducing all that are happening in jurisdictions.