A STAR CONTINUES TO GLOW!

Source: Miz B for http://nigeriafilms.com 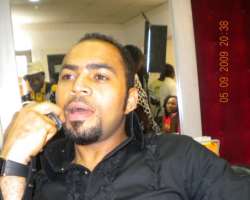 AN ODE TO RAMSEY NOUAH

I am usually not given to writing open letters to known or unknown men but I have been moved to do so. I have just watched 'The Figurine' and I must say my level of respect for Ramsey Tokunbo Nouah has risen up by ten notches! Forget the lover-boy-Martini-idol looks…Ramsey Nouah can act!! OMG! I watched him, entranced as he evolved from an asthma-suffering-glasses-wearing nerd to the sauve, stylish Ramsey we all know and love.

Listening to him speaking clear, faultless Yoruba was so sexy….Gosh! I had suspected for a long time that he could act but he was just not challenged enough so he just coasted along over the years with the occasional flash of brilliance coming out now and then (think Silent Night, Dangerous Twins etc.) That was when I started respecting him. His acting in Emem Isong's 'Reloaded' blew me away but his heart-stopping performance in 'Guilty Pleasures' lets me know 'Yes, an African Martinee Idol star has been born. His acting in 'The Figurine' lets me know that he is here to stay. Our youth-obsessed society might think he is getting on (as in older) and should probably leave the stage for the the young 'uns (the Ghana boys, if you know what I mean) but I think he is in a league of his own…he is just entering into his prime and like fine wine, is tasting sweeter and more intoxicating. That is a lot more from where that talent is coming from, believe me.

That I have a crush on Ramsey is in no doubt but not in a personal way but in a school-girl-pin-up gushy kind of way! Even when I meet him (and I do occasionally and believe me he looks SO much better in real life!), I never reveal the way I feel….because it's a guilty pleasure, the kind you eat when you know you should be dieting…secretly…covertly…Why? I dunno…maybe meeting him will spoil all the fun and the mystery and let me know that he is human after all. (who isn't?) So I leave him on my pedestal…I duff my hat to you, Ramsey Nouah and wish you many more glorious years ahead …thrilling us in with more world class performances!

Story by Miz B for http://nollywoodgists.com