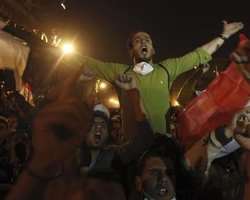 Egypt's army chief, seeking to defuse street protests that have left 37 dead, promised a swifter handover to civilian rule but failed to convince thousands of hardcore demonstrators, some of whom battled police through the night.

One man was killed in clashes early on Wednesday in the second city Alexandria, one of several towns that saw unrest.

Field Marshal Mohamed Hussein Tantawi, who has run the ruling military council since mass protests unseated his long-time ally Hosni Mubarak in February, made a faltering televised address on Tuesday in which he promised a civilian president would be elected in June, about six months sooner than planned.

Confirming Egypt's first free parliamentary election in decades will start on Monday, the council also accepted the resignation of the civilian prime minister and his cabinet, who had incensed democrats with a short-lived proposal that the army remain beyond civilian control under any new constitution.

But Tantawi angered many of the youthful demonstrators on Cairo's Tahrir Square and in other cities by suggesting a referendum on whether military rule should end earlier - a move many saw as a ploy to appeal to the many Egyptians who fear further upheaval and to divide those from the young activists.

"Leave! Leave!" came the chants in Cairo and, in an echo of February's chorus: "The people want to topple the marshal."

Long into the night, while small groups on the fringes skirmished with police in clouds of teargas, those occupying the main square sang: "He must go! We won't go!"

It is a battle of wills whose outcome is hard to predict.

PROTESTERS DIG IN
The field marshal, hanged in effigy on Tahrir Square in a visual echo of Mubarak's final days, seems intent on preserving the armed forces' vast business interests built up over six decades of effective military rule. But there was no renewal of earlier heavy-handed efforts to clear the area.

Parliamentary elections will start this coming Monday - a plan confirmed at a meeting between the army and politicians - but they will take till January to complete. It is not clear how a referendum on military rule might be organised, nor what alternative might be proposed until June's presidential vote.

Tantawi, 76 and defence minister under Mubarak for two decades, appeared hesitant, speaking in field uniform, as he told the 80 million Egyptians his army did not want power:

"The army is ready to go back to barracks immediately if the people wish that through a popular referendum, if need be."

Tens of thousands packed Tahrir, the seat of the revolution which ended Mubarak's 30-year rule, from Tuesday afternoon and, though most drifted away, thousands remained camped through the night into Wednesday, while, in tense side-streets skirmishes, diehards pelted police who hit back with batons and teargas.

In Alexandria, a 38-year-old protester was killed. A Health Ministry official said the man was shot in the head during a confrontation outside a state security building.

Police have denied using live ammunition but most of the 36 dead in the preceding five days of protest have had bullet wounds, medics say. And demonstrators have shown off cartridge casings they say come from weapons used by the authorities.

"We will stay here until the field marshal leaves and a transitional council from the people takes over," said Abdullah Galal, 28, a computer sales manager, as people set up tents across the sprawling Tahrir traffic interchange which has become the abiding symbol of this year's "Arab Spring" revolts.

A stream of motorbikes and ambulances ferried away the injured from the skirmishing on the outskirts of the protest, while at the centre of the square a mood of quiet occupation set in as blankets were brought out and small bonfires lit.

REFERENDUM SCEPTICISM
Many of the protesters saw the suggestion of a referendum, vague in its content, as a ploy to split the nation:

"He is trying to say that, despite all these people in Tahrir, they don't represent the public," said 32-year-old Rasha, one of dozens huddled around a radio in the nearby Cafe Riche, a venerable Cairo landmark. "He wants to pull the rug from under them and take it to a public referendum."

A military source said Tantawi's referendum offer would come into play "if the people reject the field marshal's speech", but did not explain how the popular mood would be assessed.

Tantawi may calculate that most Egyptians, unsettled by dizzying change, do not share the young protesters' appetite for breaking from the army's familiar embrace just yet.

For many Egyptians, trapped in a daily battle to feed themselves and their families, the political demands of some of those they view as young idealists are hard to fathom:

"I have lost track of what the demands are," said Mohamed Sayed, 32, a store clerk in central Cairo as the capital went about its normal business before the start of what protesters had hoped might be a "million man march" on Tuesday.

"If you talk to the people in Tahrir, they have no clue," added Sayed. "I don't know where the country is headed. I'm worried about my life."

On the square, however, demonstrators believed the army's reluctance to cede power could see an escalation, as activists tried to complete what some call an "unfinished revolution":

"All they are doing now is forcing people to escalate," said Mohamed, 23, a financial analyst. "They are leaving. There is no question about that.

"This opens the door for instability."
UNCERTAIN OPTIONS
When it was clear Mubarak had lost his potency, it was his former colleagues in the army who delivered the coup de grace. If it were now to be the turn of those generals themselves to have lost the legitimacy they won by easing Mubarak out with little loss of life, it is unclear who might replace them.

Some have raised the possibility of more junior officers ousting their superiors, though so far the ranks seem solid.

Using a computer analogy, protester Abdullah Galal said: "There are many viruses in the system. It needs to be cleaned out entirely. We want to delete, reformat and reinstall ... We need to change the regime like they did in Tunisia and Libya."

While the scale of protests is far short of the mass street action that ousted Mubarak, there is unrest in other cities.

In Alexandria, on the Mediterranean, protesters waved shoes in a sign of disrespect. In five days of protests in various cities, at least 1,250 people have been injured in addition to the 37 killed - a figure that includes Wednesday's death.

The United States, which gives Egypt's military $1.3 billion a year in aid, called for an end to the "deplorable" violence in Egypt and said elections there must go forward.

"We are deeply concerned about the violence. The violence is deplorable. We call on all sides to exercise restraint," White House spokesman Jay Carney said.

The unrest has knocked Egypt's markets. The benchmark share index has fallen 11 percent since Thursday, hitting its lowest level since March 2009. The Egyptian pound fell to its weakest against the dollar since January 2005.

Political uncertainty has gripped Egypt since Mubarak's fall, while sectarian clashes, labour unrest, gas pipeline sabotage and a gaping absence of tourists have paralysed the economy and prompted a widespread yearning for stability.