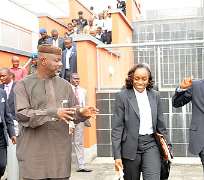 CALABAR, November 22, (THEWILL) - As a deliberate effort to accelerate technological evolution in the country, the Federal Government has announced August 2012 as deadline for the setting of the first ever Information and Communication Technology (ICT) incubation center known as “Tinapa Knowledge Centre” in Calabar.

Minister of ICT, Mrs. Omobola Johnson, who disclosed this shortly after undertaking a facility tour of the proposed site for the knowledge centre in Tinapa, Calabar, contended that a machinery has been put in motion to ensure that the necessary action like the drafting of a holistic memorandum of understanding (MOU) and other requirements to fast track the execution of the projects as a pilot scheme in the country is achieved

She maintained that when the needed road map is provided, the Federal Government will ensure a timely delivery of the projects which align with its vision of job creation as the centre will open up opportunity for the teeming youths to be meaningfully engaged and serve as a catalyst for economic transformation.

While pointing out that the establishment of the centre is also a deliberate attempt to diversify the economy from oil base to knowledge base in line with current realities, Mrs. Johnson stated that her Ministry wants to take advantage of the amazing infrastructural facilities at the Tinapa as well as the leverage on the incentives the Free Trade Zone offers to create wealth to the citizenry.

She thanked Governor Imoke for his vision to conceptualize the knowledge centre and promised to collaborate with relevant stakeholders to ensure that it comes to fruition.

Cross River State Governor, Senator Liyel Imoke, who promised to give the necessary backing for the actualization of the project, said that he was optimistic that the August 2012 deadline will be realized, adding that Tinapa has the capacity to host over fifty thousand software developers with its unlimited space including warehouses.

He maintained that the centre will provide the capacity needed at the oil and gas industrial operation adjacent to the Tinapa Resort, adding that the State Government will move beyond Tinapa and adopt the project for other parts of the state.

While assuring the Minister of a proper management of the facilities because Tinapa Managers have been trained on facility management, Imoke, however, urged the Federal Government to introduce measures that will guarantee sustainability of the project which he noted, holds very promising future for Nigeria.

The President, Institute of Software Practitioners of Nigeria (ISPON), Mr. Chris Waje, reiterated the body’s readiness to support the centre by attracting its array of professionals to the facility, which according to him is a premium facility to foster knowledge industry.

Also speaking, the Commissioner for Education Prof. Offiong Offiong, stated that in realization of the important role ICT plays in the education advancement of a nation, the state government has constructed and furnished completed laboratories in all the schools it has renovated to enhance learning skills of pupils while arrangement has concluded with Ecobank Plc to facilitate the supply of laptops to teachers in the state so as to enable the state advance to its learning process but, however, laments connectivity as a major setback

The Managing Director, Tinapa Business and Leisure Resort, Arch. Bassey Eyo Ndem, who conducted the Minister and other stakeholders round the facility, informed them that the world class infrastructure can conveniently host the knowledge centre without any interference from the retail out lets, adding that with an uninterrupted power supply, the centre will not experience any power failure.

Special Adviser, ICT Development, Mr. Odo Effiong said the department is working with relevant Federal Government agencies to secure a competent firm that will help drive the vision and subsequent realization of the project.