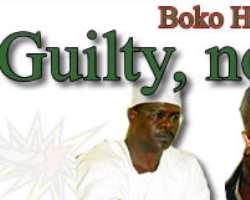 An Abuja Chief Magistrate Court yesterday convicted the spokesman of Boko Haram, Ali Sada Umar Konduga, who pleaded guilty to the charge preferred against him by the State Security Service (SSS).

He was arraigned alongside Senator Ali Ndume on a one-count charge of felony, Ndume pleaded not guilty. They were docked before Chief Magistrate Oyebola Oyewumi.

But the court deferred sentencing Konduga until the allegations against Senator Ndume who pleaded not guilty, are determined.

Clad in immaculate white babanriga and a cap to match, Senator Ndume was closed to tears in the dock as he looked uncomfortable throughout the duration of the trial which lasted for one hour.

He told the court that he never anticipated that he would spend the night in SSS custody when he was arrested on Monday.

The accused were ordered to be remanded in SSS custody. They are to be given unhindered access to their lawyers and doctors as Ndume had complained that he suffers from prostate cancer and had not taken his medication since his arrest on Monday night.

At the hearing, the prosecutor, C.I. Osagie, said that the accused persons conspired to commit felony, breach of official trust, criminal intimidation by anonymous communication by sending messages to some senior public officials including the Attorney-General of the Federation (AGF), contrary to Sections 79, 98 and 398 of the Criminal Procedure Code (CPC).

The second accused person, (Konduga) speaking through an interpreter, Mustapha Shehu Ismail, pleaded guilty to the one count charge and asked the court for leniency as the offence has already been committed.

The first accused person, (Senator Ndume) pleaded not guilty to the charge. He pleaded with the court to have access to his lawyers and medication, a request that was granted by Chief Magistrate Oyewumi.

Sentencing Konduga, Chief Magistrate Oyewumi said: 'In view of the plea of guilty by the second accused person and having failed to show why he should not be convicted, he is hereby convicted for the offence of criminal intimidation contrary to Section 398 of the CPC.

The bid by counsel to Ndume, C.I. Nnaemeka, to secure his bail failed, as the court insisted that a formal application be filed.

It would be recalled that the Islamist sect, Boko Haram, had disclosed that it has been able to sustain its activities because it has the financial backings of prominent politicians from Borno State.

Boko Haram's spokesperson, Ali Sanda Umar Konduga, (aka Usman Al-Zawahiri) disclosed this when he was paraded before newsmen in Abuja on Monday.

Konduga, had in his confessional statement, disclosed that the group started as a collection of political thugs during the regime of a former Borno State governor but fell out with him when one of their major sponsors who was a commissioner under the former governor was dropped from the state cabinet and later killed by security operatives in a crackdown on the sect members.

The war against the former governor, he said, was the reason for the escalation of blood-shed in the state. The group had carried out several attacks, killing scores of people in the North and Abuja.

He corroborated the claim made by Ogar who told journalists that a former Ambassador Pinda became the main financier of the group when it fell out the ex-governor, as the group was hijacked by his opponents, and used to cause crisis in the state while the battle to unseat the former governor lasted.

The name, Usman Al-Zawahiri, Ogar claimed, was given to Konduga by the late ambassador to conceal his identity and portray him as an extremist, but Konduga who spoke through an interpreter, said he was the one who coined the name himself.

He, however, revealed the name of the ambassador, who took over the running of the group after it fell out with the former governor as Alhaji Pinda.

Pinda, Konduga said, died while on his way to the sect's hideout to deliver N5 million as part payment of a N10 million running expenses for the group which was contacted to work for his (Pinda) political party.

According to the SSS, it was after the death of Pinda that Ndume allegedly took over the running of the group's activities.

Konduga, in his confessional statements before newsmen, however, refused to state categorically, if Ndume was a financier of the group, but admitted that they have a good relationship with him.

He said his text message communication with Senator Ali Ndume was to ask him why he accepted membership of the Federal Government committee on the security situation in the North-East.

According to him, the escalation of the activity of the Boko Haram in Borno State was to stop All Nigeria Peoples Party (ANPP) from winning elections.

He also admitted that the threat text message was sent to former President Olusegun Obasanjo on the ground of his relationship with former governor of Borno State.

He admitted that text messages were sent to everybody that had a hand in the emergence of ANPP in Borno State and to the Election Tribunal.

He also admitted that text messages scripted for him was used on many occasions to threaten the justices of the election petition tribunal in Maiduguri so as get them to sack the present government in Borno.

The same Senator, the SSS claimed, was responsible for the threat message sent to the Attorney-General of the Federation (AGF), and Minister of Justice by the group, in order to compel him (AGF) to influence the judgment of the tribunal against the Borno State government.

Highlights of some of his admissions include: 'That he was recruited by a political party stalwart in Maiduguri, Borno State; that following the compulsory registration of all SIM cards nationwide, he was asked to steal a SIM card which he used in sending threat text messages; and also that the pseudo name, Usman Al-Zawahiri was given to him by the said politician to portray him as an extremists as well as conceal his true identity.

'That one of his benefactors promised to pay him N10million to work for his party but by stint of fate, he died on his way to deliver the part payment of five million naira (N5 million) to him;

'That consequent upon this, subject claimed a serving member of the National Assembly took over the running of his activities;

'That he was behind the threat messages sent to the justices of the Election Tribunal in Maiduguri. His objective was to ensure that the tribunal sacks the present government in Borno State.

• That most of the threat text messages he sent to Justice Sabo Adamu, were scripted and relayed to him by the National Assembly member; and

• That the threat text messages eventually led to the relocation of the election petition tribunal from Maiduguri to Abuja.